Why the dollar's wrecking-ball rally is not done yet 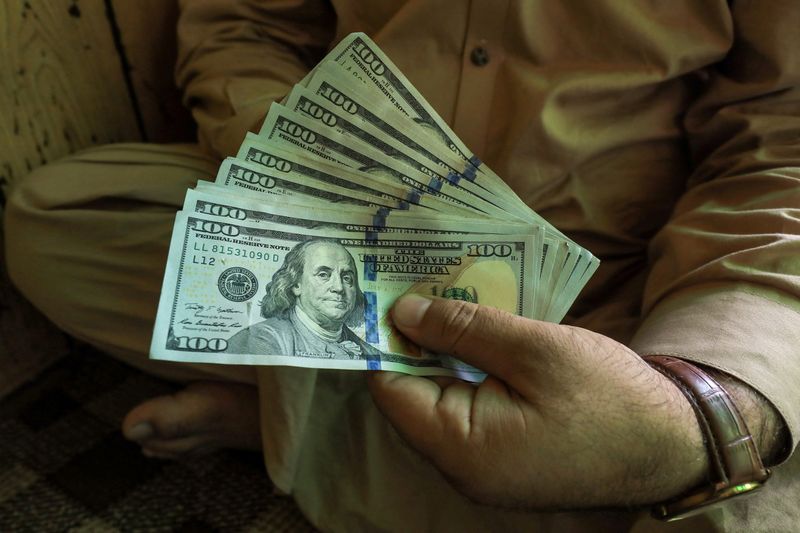 SINGAPORE (Reuters) -A rally that has the dollar on course for its best year since 1984 has further to run, traders and analysts say, suggesting more pain almost everywhere else as other currencies either crumble or require rapid rate hikes to stay put.

The rise - the dollar is up nearly 15% against a basket of currencies this year - has already been a wrecking ball through foreign exchange markets, crushing the euro and yen to two-decade lows and sterling to its lowest in nearly 40 years.

Tuesday's surprisingly hot U.S. inflation data led the latest surge as investors price in larger and faster U.S. rate rises in response and are even speculating the Federal Reserve could hike by a full percentage point next week.

That sort of outlook, and the backing for the dollar in markets, is a direct challenge to global central banks, who face a choice between watching their local currencies weaken, or slowing the process by either selling dollars or raising rates, risking a sharp slowdown in economic growth.

"I don't think there is anything that can stop the dollar," said Rabobank strategist Michael Every, as long as U.S. rates are rising.

"There will be intermittent phases where the market might try to delude itself and pretend what is happening isn't happening," he said. "(But) we see the dollar significantly stronger by year-end."

Gains against individual majors have been immense, with the dollar up about 14% on the euro this year, 17% on sterling and nearly 25% on the yen.

Interest rates have been a major driver, as higher rates give dollar bonds and deposits attractive yields.

The European Central Bank only last week turned to talk of "front-loading" hikes. China is cutting rates, while Japan is steadfastly holding them at zero. Analysts say safety and the relative robustness of the U.S. economy provide extra tailwinds.

"To see the dollar weaken from here we would need to see some of these factors reverse," said Alex Wolf, Asia head of investment strategy at J.P. Morgan Private Bank.

"We believe the dollar may continue to see near-term upside and that strength is likely to persist and we continue to encourage clients to hedge their non-dollar exposures.

The dollar's long rise is growing uncomfortable for trading partners because increasing dollar-priced import costs come as the world grapples with runaway inflation.

The most discomfort is apparent in Asia where commodity importing countries such as South Korea and India have faced heavy selling pressure on their currencies and economic worries have China struggling to contain a slide in the yuan.

The biggest loser, however, has been the Japanese yen. The Bank of Japan's refusal to budge on a policy of forcing bond yields to stay near zero, while U.S. rates rise sharply, has left the yen as the prime corollary of dollar strength.

"You have these two very, very firm central banks. One is moving higher and the other is flatlining," said Bart Wakabayashi, branch manager at State Street (NYSE:STT) in Tokyo.

"What is the effect? The currencies will diverge. Until there's a change in that -- either the Fed starts to come down or the BOJ starts to come up, this should continue," he said, with a yen slide to 147 per dollar a possibility.

The yen pulled away from a 24-year trough on Wednesday after reports that the Bank of Japan conducted a rate check, in apparent preparation for rare currency intervention, though markets believed the respite likely won't last long.

To be sure, the dollar's rally will surely end eventually and not everyone is betting it has much further to rise.

Positioning data shows the market is long dollars but not remarkably so by historical standards, and economists say the point of raising U.S. rates, which is to slow the economy, is ultimately a dollar negative.

"The Fed has to slow the U.S. economy if it wants to get inflation down. All they have done is remove accommodation. They haven't moved to a restrictive policy," said ING's Asia-Pacific head of research, Rob Carnell.

But with timing and nature of the dollar's eventual retreat so unclear, most are getting out of its way.

"We are seeing large bids in the dollar right now," said Shafali Sachdev head of FX, fixed income and commodities for Asia at BNP Paribas (OTC:BNPQY) Wealth Management in Singapore.

"It continues to be supportive for the dollar in the short term because the market is in the process of re-pricing expectations of the Fed's policy path, and the expectation of a pivot by the Fed on rates gets moved further down."