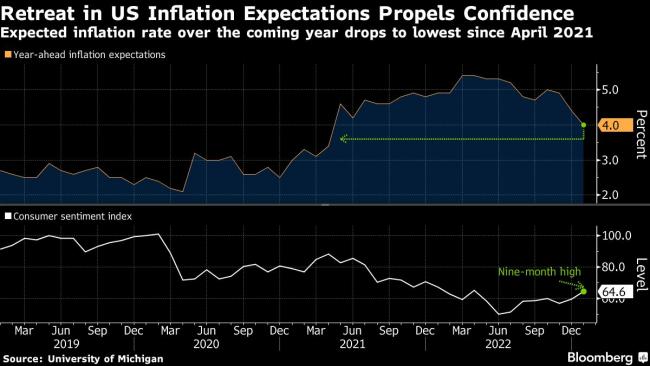 (Bloomberg) -- US short-term inflation expectations fell in early January to the lowest in nearly two years, providing a bigger-than-expected boost to consumer sentiment.

Respondents said they expect prices to advance 4% over the next year, the lowest since April 2021, the University of Michigan’s preliminary survey reading showed Friday. The sentiment index rose to a nine-month high of 64.6 from 59.7 at the end of the year, beating all estimates in a Bloomberg survey of economists.

Consumers expect inflation to rise 3% over the next five to ten years, a slight uptick from the prior month. The Federal Reserve watches long-term views especially closely, as expectations can become self-fulfilling and lead to higher prices.

Data out Thursday showed that US inflation continued its downward trend in December, adding to evidence price pressures have peaked and offering the Fed room to slow the pace of interest-rate hikes next month.

Combined with a strong labor market, Americans are feeling increasingly upbeat about the economy and their finances. Prices at the pump have fallen sharply from summer highs, grocery inflation has slowed and unemployment has retreated to a five-decade low.

The university’s gauge of current personal finances rose to an eight-month high, while expectations climbed to the highest in a year. A majority of respondents said they anticipate their incomes to rise at least as fast as prices in the year ahead, the most since October 2021.

The measures of current conditions and future expectations both advanced to the highest in nine months. Buying conditions for large household goods also improved, though consumers noted higher borrowing costs.

Recession risks remain, however, and are one of the factors restraining consumer sentiment from rebounding to its pre-pandemic level. Many economists expect the Fed’s interest rate hikes to tip the economy into a downturn at some point over the next year, pushing up unemployment.

The economic outlook for the year ahead worsened but improved over the next five years to the highest since April, the report said.

“Two-thirds of consumers expect an economic downturn in the year ahead, reflecting how low sentiment remains despite recent improvements,” Joanne Hsu, director of the survey, said in a statement.

“That said, given current historic lows in unemployment and strength in expected incomes, a gradual slowdown in spending appears more likely than a cliff-like drop,” she said.