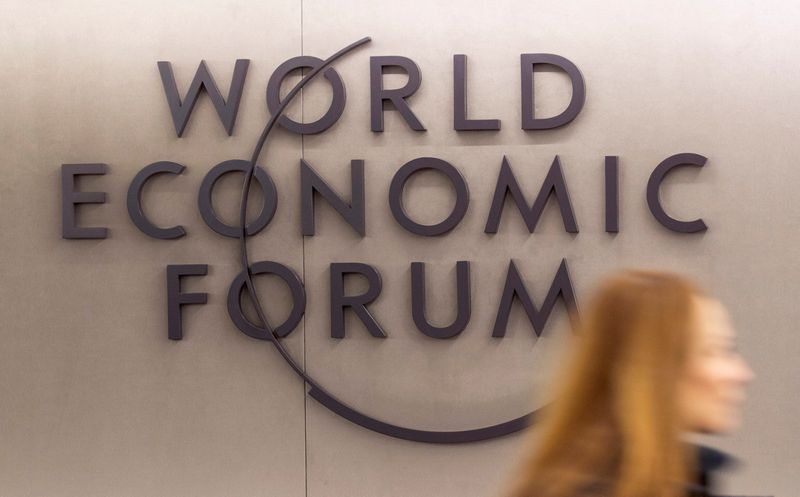 © Reuters. A woman walks past the logo of the World Economic Forum (WEF) 2023 at Davos Congress Centre in the Alpine resort of Davos, Switzerland, January 15, 2023. REUTERS/Arnd Wiegmann

DAVOS, Switzerland (Reuters) -Two-thirds of private and public sector chief economists surveyed by the World Economic Forum (WEF) expect a global recession in 2023, the Davos-organiser said on Monday as business and government leaders gathered for its annual meeting.

Some 18% considered a world recession "extremely likely" - more than twice as many as in the previous survey conducted in September 2022. Only one-third of respondents to the survey viewed it as unlikely this year.

"The current high inflation, low growth, high debt and high fragmentation environment reduces incentives for the investments needed to get back to growth and raise living standards for the world's most vulnerable," WEF Managing Director Saadia Zahidi said in a statement accompanying the survey results.

The organisation's survey was based on 22 responses from a group of senior economists drawn from international agencies including the International Monetary Fund, investment banks, multinationals and reinsurance groups.

The survey comes after the World Bank last week slashed its 2023 growth forecasts to levels close to recession for many countries as the impact of central bank rate hikes intensifies, Russia's war in Ukraine continues, and the world's major economic engines sputter.

Definitions of what constitutes recession differ around the world but generally include the prospect of shrinking economies, possibly with high inflation in a "stagflation" scenario.

On inflation, the WEF survey saw large regional variations: the proportion expecting high inflation in 2023 ranged from just 5% for China to 57% for Europe, where the impact of last year's rise in energy prices has spread to the wider economy.

A majority of the economists see further monetary policy tightening in Europe and the United States (59% and 55%, respectively), with policy-makers caught between the risks of tightening too much or too little.

While a global slowdown would risk hitting investment in areas from education and health to tackling poverty and climate, some see it driving inflation down and forcing the U.S. Federal Reserve and others to hold back from further rate hikes.

"I want the outlook to become a little weaker so that the Fed rates start going down and that whole sucking-out of liquidity by global central banks eases," Sumant Sinha, chairman and CEO of Indian clean energy group ReNew Power, told Reuters on the sidelines of the Davos meeting.

"That will benefit not just India but globally," he said, adding the current round of rate hikes was making it dearer for clean energy companies to fund their capital-intensive projects.

Others said that while more affluent people would likely escape the worst effects of recession on the back of high inflation levels, it would hit lower middle income groups hard.

"If you only have your time and your energy which is creating your income, you're getting ravaged right now because your wages are just not keeping pace," said Anthony Scaramucci, founder of U.S.-based investment firm SkyBridge Capital.

Other main findings of the WEF survey included:

- Nine out of 10 respondents expect both weak demand and high borrowing costs to weigh on firms, with more than 60% also pointing to higher input costs.

- these challenges are expected to lead multinational businesses to cut costs, from reducing operational expenses to laying off workers

- however, supply chain disruptions are not expected to cause a significant drag on business activity in 2023

- the cost-of-living crisis may also be nearing its peak, with a majority (68%) expecting it to have become less severe by the end of 2023.