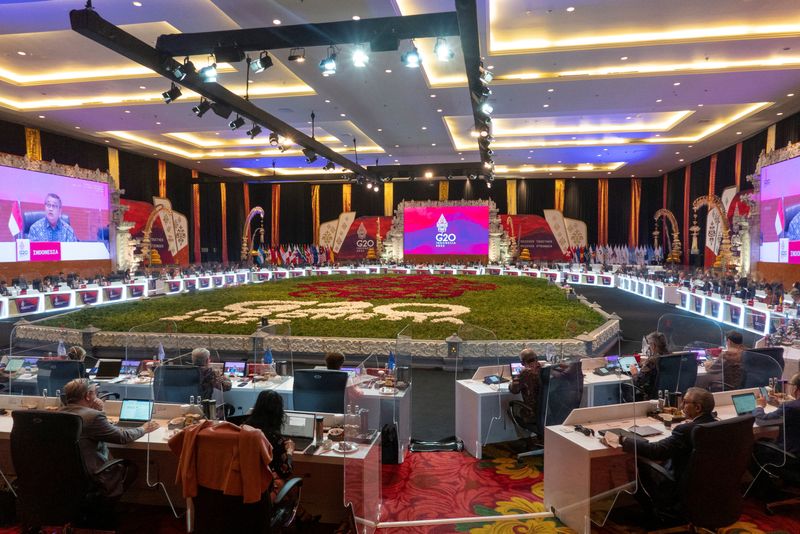 By Gayatri Suroyo and Rachel Savage

JAKARTA/LONDON (Reuters) -Zambia's creditors pledged to negotiate a restructuring of the country's debts on Saturday, a move IMF managing director Kristalina Georgieva welcomed as "clearing the way" for a $1.4 billion Fund programme.

The creditor committee, co-chaired by China and France, said in a statement released by G20 chair Indonesia that it supported Zambia's "envisaged IMF upper credit tranche program and its swift adoption by the IMF Executive Board".

In 2020, Zambia became the first African country in the pandemic era to default. The restructuring of its external debt, which amounted to more than $17 billion at the end of 2021, is seen by many analysts as a test case.

"Very pleased the Official Creditor Committee for Zambia has provided its financial assurances clearing the way for a Fund program," IMF managing director Kristalina Georgieva said in a tweet https://twitter.com/KGeorgieva/status/1553342384502710272.

"The delivery of these financing assurances will enable the IMF Executive Board to consider approval of a Fund-supported program for Zambia and unlock much needed financing from Zambia's development partners," Georgieva said in a statement released by the IMF after her tweet.

Zambia reached a staff-level agreement with the IMF on a $1.4 billion three year extended credit facility in December, conditional upon its ability to reduce debt to levels the Fund deems sustainable.

Zambia's government welcomed the creditors' pledge and its unlocking of IMF support.

"Zambia remains committed to implementing the much needed economic reforms, being transparent about our debt and ensuring fair and equitable treatment of our creditors," finance minister Situmbeko Musokotwane said.

On Friday, the finance ministry said it was cancelling $2 billion in undisbursed loans.

Zambia's creditor committee said that the restructuring terms would be finalised in a memorandum of understanding, without providing further details.

It also called on private creditors to "commit without delay" to negotiating debt relief on terms at least as favourable.

The World Bank echoed those comments, with its president David Malpass stating, "I urge official bilateral and private sector creditors to participate on comparable terms, granting Zambia a substantial net-present-value reduction in debt."

Kevin Daly, who chairs a committee of holders of Zambia's Eurobonds, welcomed the bilateral creditors' statement, but repeated a call to be given access to the IMF's Debt Sustainability Analysis (DSA), which forms the basis of negotiations.

"That's where you could have delays with the restructuring, if all of a sudden we get the DSA and ... (it) is just way too conservative, in terms of the forecasts," Daly, of emerging markets investor abrdn, told Reuters by telephone.

The first bilateral creditor meeting was held in June, after Zambia's government complained of delays to the restructuring. Talks are taking place under the Common Framework, a debt relief process launched by the Group of 20 major economies in 2020 that has been criticised by some for being slow to yield results.

"This shows the potential of the #G20CommonFramework for debt treatment to deliver for countries committed to dealing with their debt problems," Georgieva said in the tweet.