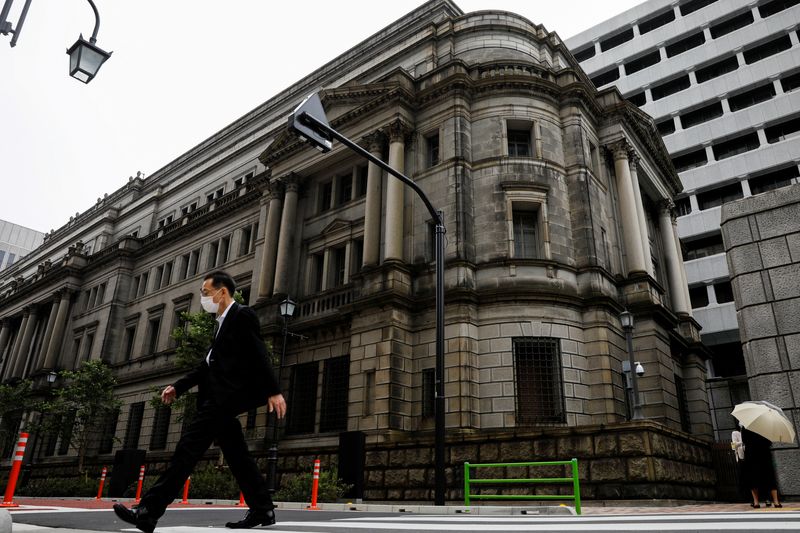 © Reuters. FILE PHOTO: A man wearing a protective mask walks past the headquarters of Bank of Japan in Tokyo, Japan, May 22, 2020.REUTERS/Kim Kyung-Hoon/File Photo

By Leika Kihara and Yoshifumi Takemoto

TOKYO (Reuters) - The Bank of Japan's resolve to defend its yield cap faces attack from investors betting the central bank could give in to global market forces, opening up a slim chance for a near-term tweak in its policy.

While few expect the bank to make a change on Friday to its policy of yield curve control (YCC), which guides the yield on the 10-year Japanese government bond (JGB) around 0%, sharp falls in the yen currency are making some lawmakers anxious.

These are driven partly by the central bank's aggressive efforts to defend an implicit 0.25% cap for the yield target.

Five government officials and sources familiar with the central bank's thinking say the key to its move on Friday could be how far the yen slumps from current 24-year lows to pose a big enough risk to prompt a monetary policy response.

"Central banks don't target exchange rates in guiding policy," one of the sources said. "But the yen has been falling at such a sharp pace it's hurting the economy, which warrants attention."

A second source echoed this view.

On Wednesday, top government spokesperson Hirokazu Matsuno voiced hope that the BOJ would take "necessary measures appropriately" in light of the yen's falls.

"We're hoping the BOJ will take some sort of step at Friday's meeting," a government official told Reuters, speaking on condition of anonymity.

"It's hard to think the BOJ won't do anything when the U.S. Federal Reserve could be raising rates by 75 basis points."

Prospects of aggressive U.S. interest rate hikes have pushed up long-term interest rates across the globe, including Japan, forcing the BOJ to ramp up bond buying to defend its yield cap.

The BOJ spent roughly 3 trillion yen ($22 billion) to buy bonds on Tuesday, following up with additional purchases on Wednesday across the yield curve to defend its cap of 0.25%.

Even so, the 10-year JGB futures plunged to levels last seen in 2014, on selling by speculators betting that the BOJ will be forced to tweak its YCC policy.

"I believe foreign investors think that the BOJ should adjust the YCC framework, that's why they are now challenging the BOJ."

In theory, the BOJ can buy bonds indefinitely to defend the cap with the money it prints, but doing that would accelerate yen falls that inflate the cost of imports and hurt the economy.

Markets expect the Fed to deliver a 75-basis-point hike at the Federal Open Market Committee (FOMC) meeting later on Wednesday, which could accelerate yen falls and add pressure on the BOJ.

"I remain concerned that the Bank of Japan policy meeting is an underrated risk point this week, perhaps even more so than the FOMC outcome itself," said Jeffrey Halley, a senior market analyst for Asia Pacific at OANDA.

A very hawkish Fed outlook will lift the dollar/yen again and may force the BOJ into lifting the 10-year yield cap slightly, he added.

To be sure, there is little reason for the BOJ to modify YCC now, with inflation much lower than in Western countries and the fragile economy still in need of monetary support.

Veteran BOJ watcher Naomi Muguruma expects the BOJ to hold fast on Friday, but said the bank could raise its yield cap to 0.50% from 0.25% if the government asked for help in arresting sharp falls in the yen.

Such a hike in the yield cap would be accompanied by yen-buying intervention by the government.

"This is a risk scenario in case yen falls continue, and it's clear the moves are hurting corporate and household sentiment," she said.