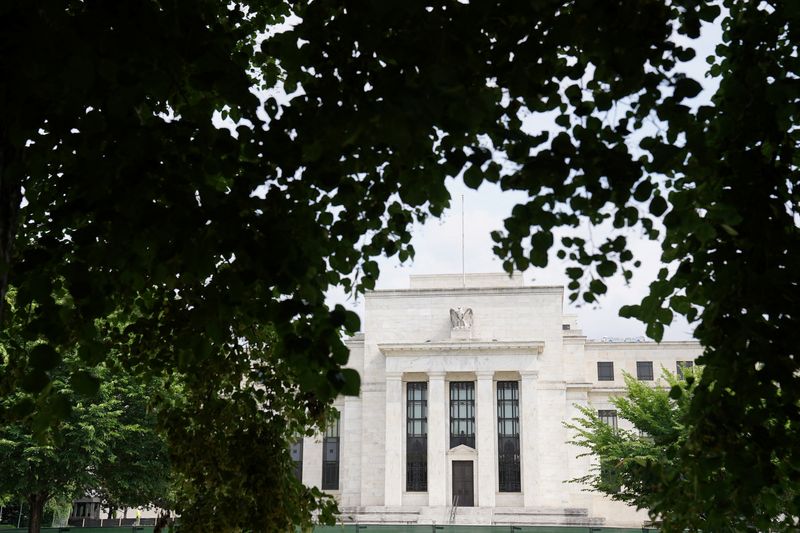 NEW YORK (Reuters) - Bond investors are embracing safety in their portfolios as volatile markets price in a super-sized hike from the Federal Reserve following evidence of scorching inflation.

Investors have drastically shifted their expectations about Wednesday's decision to a rate hike of 75 basis points (bps) - not the 50 bps the market was expecting last week. The increased hawkishness has sent equity markets tumbling and bond yields surging, briefly inverting the yield curve and pushing stocks into a bear market.

Many investors support the Fed moving faster to dampen inflation, but they worry about the risk of recession.

"A surprise 75 basis-point hike would be a happy one," said Nancy Tengler, chief executive officer and chief investment officer at Laffer Tengler Investments in Scottsdale, Arizona.

"The question is whether the economy can avoid recession and that would depend on what the Fed does. If the Fed raised by 50 and they say they're willing to consider 75, then we know that they're not going to get ahead of inflation. You need to front-end load the hikes."

Tengler said her firm has been "defensive" in its bond portfolios, shortening duration and increasing the underlying quality of the assets.

Overall, futures on the fed funds rate, or the rate on unsecured overnight loans between banks, now reflect an 87% chance of a 75 bps rate hike on Wednesday, and a 75% probability of another such increase in July. The market has also factored in a fed funds rate of 4% by the summer next year.

The Fed has already raised rates by 75 basis points this year. It also began to shrink its balance sheet this month, a process called quantitative tightening. The Fed's balance sheet ballooned to nearly $9 trillion as part of its pandemic policy accommodation

The recent big spike in inflation was a major catalyst to the shift in expectations. Last Friday, data showed that in the 12 months through May, the U.S. consumer price index (CPI) surged 8.6%, the largest year-on-year increase in roughly 40 years. (Graphic: Inflation, https://graphics.reuters.com/USA-STOCKS/myvmnrmenpr/inflation.png)

Some, however, have reduced those short-maturity trades, believing there are opportunities in the market given how credit spreads have widened and how rates have risen significantly since the beginning of the year.

"We are still short duration albeit to a lesser degree. We have been upgrading the quality of our portfolios under the premise that choppier markets and tighter monetary policies should cause credit spreads to widen," said R.J. Gallo, senior portfolio manager at Federated Hermes (NYSE:FHI) in Pittsburgh.

His portfolios are also slightly overweight Treasuries and even though their duration is short, "we still like the high-quality nature of Treasuries for playing defense."

But despite the Fed's aggressive tightening, bond investors see opportunities in the fixed income space and for some, it may be time to start moving away from safety bets.

"At this point, being incredibly conservative from both a credit and duration standpoint is not the right place to be," said Jason Brady, chief executive officer at Thornburg Investment Management in Santa Fe, New Mexico, overseeing $46 billion in assets.

"That's where we were and we're moving away from that."

Brady, for instance, cited U.S. high yield debt, with its spread to Treasuries widening to 487 basis points on Monday. On top of a 3.5% yield in U.S. five-year Treasuries, he noted that an investor would net a more than 7% yield, which is "not terrible."

David Petrosinelli, managing director at broker-dealer InspereX in New York, has also been advising investors to be defensive in bond portfolios since the fourth quarter of last year, but still believes the Fed could slow the pace of tightening later this year.

He recommends a barbell strategy, which combines short and long maturity bonds. If rates rise, the investor will have the opportunity to reinvest the proceeds of the shorter-term securities at the higher rate.

Petrosinelli believes the Fed's aggressive hikes this year will lead to a dramatic tail-off in consumption by end-2022.

"That's going to slow the Fed down in the fourth quarter in terms of hiking rates. They will still need to raise rates, but the magnitude is going to decline quickly."