Weekly comic: bonds vs equities in 2023 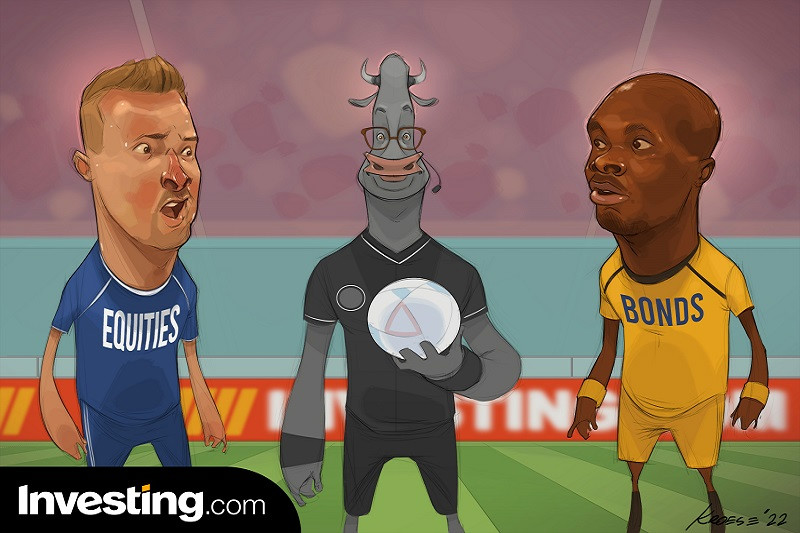 Investing.com -- It looks like the verdict’s in: 2023 will be the year that bonds give equities the kicking that they’ve been asking for these last 12 years.

A broad consensus on Wall Street and Europe is backing fixed-income to outperform next year, after what some term “a historic reset” of global inflation, growth and interest rates that has set the developed world up for a recession and a year of belt-tightening.

The sobs of relief from wealth managers – especially in Europe, where zero interest rates have made bonds a lousy bet for the last decade – are particularly intense, as well they might be: more often than not, investing in bonds requires more manager discretion than the simple index-based fund investing that made equity investors so much easy money until this year’s debacle. And more active management means higher fees, allowing the industry a welcome return to a simpler and, truth be told, more honest business model after five years of pushing systematic greenwashing dressed up as ESG-themed funds.

But enough cynicism. Is the consensus right? Certainly there some good grounds to think so.

After offering little more than pennies for the last decade, bonds are now generating meaningful returns: the risk-free benchmarks in the U.S., U.K. and Eurozone yield 4.47%, 3.20% and 2.01% respectively at the time of writing. Sub-sovereign, mortgage and high-quality corporate debt yield substantially more, and while they may still be below current inflation rates, the likelihood of inflation falling over the next two years means that holding bonds is no longer the sure-fire certainty of slow wealth destruction that it has been in during the age of Quantitative Easing.

Recession is already setting in across Europe and is set to arrive in the U.S. around the middle of next year, while recent developments have made clear how difficult it will be for China to escape its Zero-Covid trap, making another year of sub-par growth likely in the world's second-largest economy.

That is not a backdrop for good stock returns.  Morgan Stanley analysts think that stocks have further to fall, as the coming recession depresses earnings. Lisa Shalett, chief investment officer with Morgan Stanley (NYSE:MS) MS) Wealth Management, argued in a blog this week that S&P 500 company earnings will be only $195 per share next year, rather than the $230 currently expected.

“Companies’ extraordinary ability to boost sales and profitability in recent years is unsustainable and may soon reverse,” in a higher rate environment, she argued.

The public’s focus on the current state of the economy rather than the outlook means that stocks typically react less immediately, and less predictably, than bonds as central banks pivot from tightening to loosening policy.

But the first sign of policy loosening is usually enough to persuade lenders to keep credit lines to big companies open, hence the recommenation from BNP Paribas (OTC:BNPQY) chief market strategist Daniel Morris that investment-grade corporate credit is the best place to be in the next few months.

“Low valuations (that is, high spreads), do not accurately reflect what we believe are favorable fundamentals,” he argued in a note to clients this week. By contrast, he added, “We are not yet ready to add more broadly to riskier assets such as equities…still fearing greater downside to both growth and earnings,” along with the ever-present risk that geopolitics could easily take a turn for the worse next year.

But most professionals still caution against betting on too quick a rebound.

“Holding either asset will be more rewarding next year than this,” Tom Stevenson, Investment Director at Fidelity Personal Investing said in a blog this week. “But rotating steadily from an overweight in government bonds at the start of the year to a preference for shares at the end could make a good year even better.”