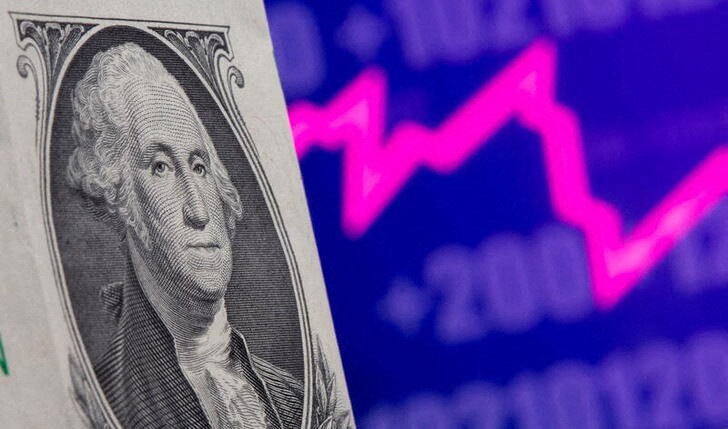 © Reuters. FILE PHOTO: A U.S. one dollar banknote is seen in front of displayed stock graph in this illustration taken May 7, 2021. REUTERS/Dado Ruvic

LONDON (Reuters) - World markets got 2022 off to a confident start on Monday, with European stocks striking a record high, Wall Street expected to follow and oil prices and benchmark government bond yields moving higher too.

London's traders were enjoying their final day of festive rest, but mainland Europe made a lively start, notching an all-time peak for the STOXX 600 index after an encouraging flurry of euro zone and eastern European data.

The euro zone's Manufacturing Purchasing Managers' Index (PMI) dipped to 58.0 in December from November's 58.4, but it matched an initial "flash" estimate despite the recent surge in coronavirus infections and was still comfortably above the 50 mark separating growth from contraction.

"We're seeing some tentative but very welcome signs that the supply chain crisis which has plagued production lines all across Europe is beginning to recede," said Joe Hayes, a senior economist at IHS Markit that compiles the PMI survey.

The data also showed firms' stocks of purchases rising at a survey-record rate in December. That meant the input prices index sank to an high eight-month low, even though it remains relatively high, allowing factories to raise their prices at a much slower pace.

Bourses in Germany, France, Italy and Spain rose between 0.9% and 1.3% ahead of what looked set to be a return to record highs for Wall Street's S&P 500 when it opens later. [.N]

The confident start to the year also showed in bond markets where 10-year German government bond yields - the benchmark for European borrowing costs - and yields on U.S. Treasuries were up between 3-4 basis points with investors expecting a series of U.S. interest rate rises this year. [/FRX]

For Bunds the rises in yields had left them at the highest level since November. The prospect of higher rates lifted euro zone bank stocks 1.2% too. Carmakers were also up 1.8% after both Tesla (NASDAQ:TSLA) and Hyundai issued bullish targets for this year.

In the currency markets, the euro zone data did little for the euro as focus remained squarely on how much further the dollar could rise if the Federal Reserve hikes U.S. interest rates three times this year, as is currently expected.

Turkey's lira saw a bumpy start to the year though, diving as much as 5% as its central bank revealed it had used up more than $3 billion of its reserves last month when the currency slumped to record lows.

It spent the rest of the morning trying to recover but it came also after Turkey's statistics agency also reported that annual inflation jumped far more than expected to 36% year-on-year in December, the highest since September 2002.

"This reflects a vicious cycle of demand-pull inflation, which is very dangerous because the central bank had implied the price pressure was from supply constraints, and that it couldn't do anything about it," said Ozlem Derici Sengul, founding partner at Spinn Consulting in Istanbul.

Another of 2021's big dramas, the meltdown of some of China's biggest homebuilders, had also rumbled back to life overnight when China Evergrande's shares were suspended pending the release of "inside information".

The default-stricken firm is the world's most indebted developer. It has set up a risk management committee saying it will actively engage with its creditors but local Chinese media reported over the weekend one city government had ordered it to demolish 39 buildings, due to illegal construction.

The commodity markets were also quickly back in the swing of things after their stellar last 18-20 months.

Oil rose towards $79 a barrel on Monday, supported by tight supply and hopes of further demand recovery in 2022 spurred in part by a view that the Omicron coronavirus variant is unlikely to shut down the global economy again. [O/R]

OPEC and its allies, known as OPEC+, are expected to stick to a plan to raise output gradually at a meeting on Tuesday.

"Infection rates are on the rise globally, restrictions are being introduced in several countries, the air travel sector, amongst others, is suffering, yet investors' optimism is tangible," said Tamas Varga of oil broker PVM.

Five out of eight top Asian economies have shown an improvement in their headline PMI readings in recent days and all eight are in expansionary territory.

In China, NBS manufacturing PMI reached a five-month high, marking a second month above 50 as the drags from production and power cuts continued to fade. India's equivalent IHS Markit reading dipped fractionally on Monday but was still at 55.5.

For a related graphic on Global PMIs, click https://fingfx.thomsonreuters.com/gfx/mkt/egpbkjykyvq/Pasted%20image%201641216206378.png