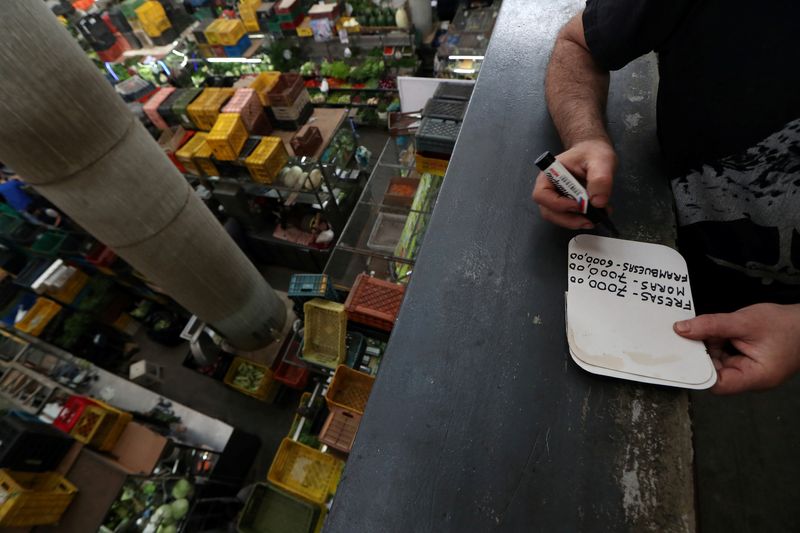 CARACAS (Reuters) - Venezuelan consumer prices rose at a sharp 37.2% clip in December from November, heightening the risk of a return to hyperinflation, according to estimates by the Venezuelan Finance Observatory, a non-governmental group of economists.

The private inflation estimate is key since Venezuela's central bank, which in October said annual inflation hit 155%, one of the highest rates globally, has not released consumer price data since then.

After the policies were rolled out, authorities said Venezuela had emerged from a four-year streak of hyperinflation.

But the strategy has begun to crack, sources have told Reuters. Since November, the government has ramped up spending and demand for dollars has outstripped the central bank's foreign currency reserves, meanwhile the local bolivar currency has weakened further and impacted prices.

Venezuela's year-on-year inflation in December was likely 305.7%, the group estimated.

"Venezuela's economy is facing the danger of a hyperinflationary outbreak, which is gaining strength with the sustained devaluation of the bolivar carried out by the central bank," the group said in a statement.

The central bank did not respond to a Reuters request for comment.

In December, clothing and footwear prices rose 57.8% from the previous month, while household wares rose 55.8%, according to the estimates.

Cash flow into the country has dropped amid an exchange rate storm, with the government pausing cash payments in dollars to some suppliers, affecting the public sector.