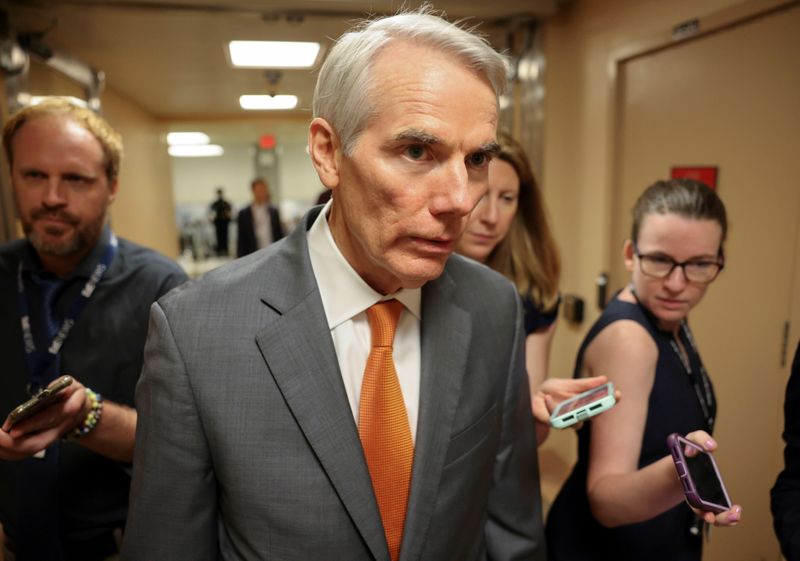 By David Lawder and Joel Schectman

The provision, aimed at increasing Internal Revenue Service (IRS) collections, will instead likely be added to a separate budget "reconciliation" bill being pushed by Democrats as a vehicle for passing trillions of dollars more in spending and tax increases, Portman said on CNN's State of the Union program.

President Joe Biden has said he wants to invest $80 billion in IRS technology and enforcement to increase collections of taxes by $700 billion over 10 years. The provision outlined in the infrastructure bill would account for around $100 billion of that larger goal, according to Democratic senators' estimates.

The decision to exclude the IRS provision from the $1.2 trillion infrastructure bill comes as senators and the White House are trying to negotiate the final details of the package ahead of a key procedural vote planned for Wednesday.

Senate Majority Leader Chuck Schumer has said he wants to hold a "cloture" vote to meet the 60-vote threshold needed to end debate and allow the infrastructure bill to proceed to a final vote.

"In terms of IRS reform or IRS tax gap, which was originally in the proposal, that will no longer be in our proposal. It will be in the larger reconciliation bill we're told," said Portman, who is among senators working to negotiate the legislation.

Portman said that there was Republican "pushback" against the IRS proposal after the party learned that Democrats were also planning to add a bigger IRS enforcement proposal into the separate reconciliation spending bill. Democrats hope to pass the reconciliation bill without Republican support under budget rules that allow them to proceed with just a simple majority, which would require them to use the tie breaking vote of Vice President Kamala Harris.

"That created quite a problem," said Portman said, because Republicans believed they had agreed with Democrats on the full extent of IRS enforcement in the infrastructure bill.

"And President Biden, to his credit, said we will not be re-negotiating these items in the reconciliation package."

Republican Senator Bill Cassidy, who is also among the infrastructure bill's negotiators, said it was unclear if they would be able to proceed with Wednesday's procedural vote.

He told Fox News Sunday that the deal could proceed alongside Democrats' larger reconciliation bill if the right revenue measures to pay for it could be found.

Wednesday's vote would require 60 votes in the Senate to proceed, meaning it would need the support of at least 10 Republicans, assuming all Democrats support it.

"How can I vote for cloture when the bill isn't written?" Cassidy said. "Unless Senator Schumer doesn't want this to happen, you need a little more time to get it right."

Schumer, speaking to reporters in New York on Sunday, said there was "no reason" that the bipartisan group negotiating the infrastructure package could not come to an agreement by Wednesday.