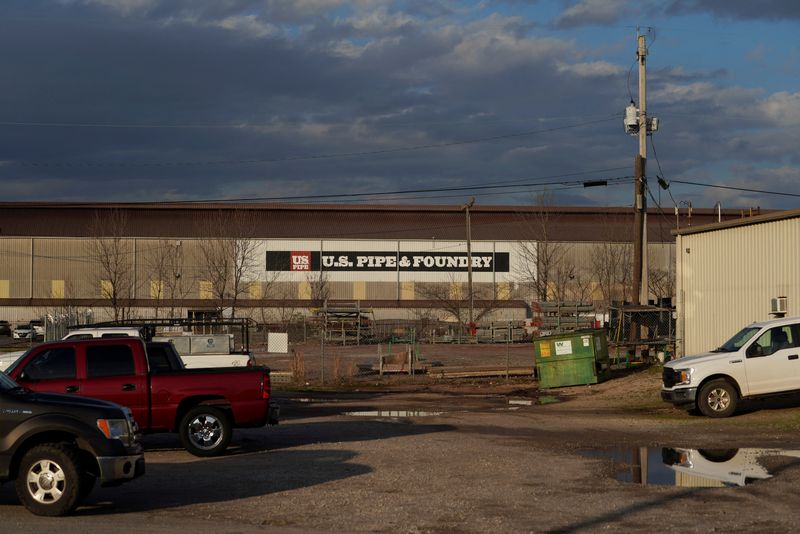 WASHINGTON (Reuters) - U.S. manufacturing activity slowed less than expected in July and there were signs that supply constraints are easing, with a measure of prices paid for inputs by factories falling to a two-year low, suggesting inflation has probably peaked.

While the Institute for Supply Management survey on Monday showed a measure of factor employment contracting for a third straight month, Timothy Fiore, chair of the ISM Manufacturing Business Survey Committee, noted that "companies continue to hire at strong rates, with few indications of layoffs, hiring freezes or headcount reduction through attrition."

The better-than-expected ISM reading suggested that the economy was not in recession despite a decline in gross domestic product in the first half of the year. Businesses, however, are sitting on excess inventories after ordering too many goods because of worries about shortages, depressing new orders.

"This intensifies risks of a harder landing in the manufacturing sector later this year. That said, the overall PMI would still need to decline a fair bit to reach readings consistent with outright economic recession."

The ISM's index of national factory activity dipped to 52.8 last month, the lowest reading since June 2020, when the sector was pulling out of a pandemic-induced slump. The PMI was at 53.0 in June. A reading above 50 indicates expansion in manufacturing, which accounts for 11.9% of the U.S. economy.

Economists polled by Reuters had forecast the index would fall to 52.0. A reading above 48.7 over a period of time generally indicates an expansion of the overall economy.

High inflation remained a complaint among businesses even though overall price increases for inputs have started slowing considerably. Makers of chemical products said inflation is "slowing down business," and also noted an "overstock of raw materials due to prior supply chain issues and slowing orders."

Manufacturers of food products reported that "many customers appear to be pulling back on orders in an effort to reduce inventories." Textile mill operators said "continuing delivery and staffing issues have eaten away the bottom line."

The ISM survey's forward-looking new orders sub-index dropped to 48.0 from a reading of 49.2 in June. It was the second straight monthly contraction. Combined with a steady reduction in order backlogs, that suggests a further slowdown in manufacturing in the months ahead.

Many retailers, including Walmart (NYSE:WMT), have reported carrying excess inventory as soaring inflation forces consumers to spend more on low-margin food products instead of apparel and other general merchandise.

Stocks on Wall Street were trading modestly lower. The dollar fell against a basket of currencies. U.S. Treasury prices were mostly higher.

The ISM's measure of factory inventories increased to a 38-year high in July. According to the ISM's Fiore, companies were showing the most concern about their inventory levels since the start of the COVID-19 pandemic two years ago when a slowdown in manufacturing activity was anticipated.

The moderation in manufacturing also reflects a shift in spending back to services from goods and the impact of rising interest rates as the Federal Reserve tackles inflation. The U.S. central bank last week raised its policy rate by another three-quarters of a percentage point. It has now hiked that rate by 225 basis points since March.

The economy contracted 1.3% in the first half of the year. Wild swings in inventories and the trade deficit tied to snarled global supply chains have been largely to blame, though overall momentum has cooled.

Supply bottlenecks are loosening up, which is helping to curb inflation at the factory gate. The ISM's measure of supplier deliveries dropped to 55.2 from 57.3 in June. A reading above 50% indicates slower deliveries to factories.

The survey's gauge of prices paid by manufacturers plunged to 60.0, the lowest level since August 2020, from 78.5 in June.

"This should please the Fed and provides further evidence that rate hikes won't need to continue through 2023," said James Knightley, chief international economist at ING in New York.

But the road to low inflation will be long. While the survey's measure of factory employment rose to 49.9, it remained in contraction territory for a third straight month, with manufacturers continuing to express difficulty finding workers.

High turnover related to quits and retirements was also frustrating efforts to adequately staff factories. There were 11.3 million unfilled jobs across the economy at the end of May, with nearly two job openings for every unemployed worker.

"This report is consistent with the Fed's desire to give the supply side a chance to catch up with demand, but there is a long way to go as the manufacturing sector appears to continue to struggle with shortages," said Conrad DeQuadros, senior economic advisor at Brean Capital in New York.