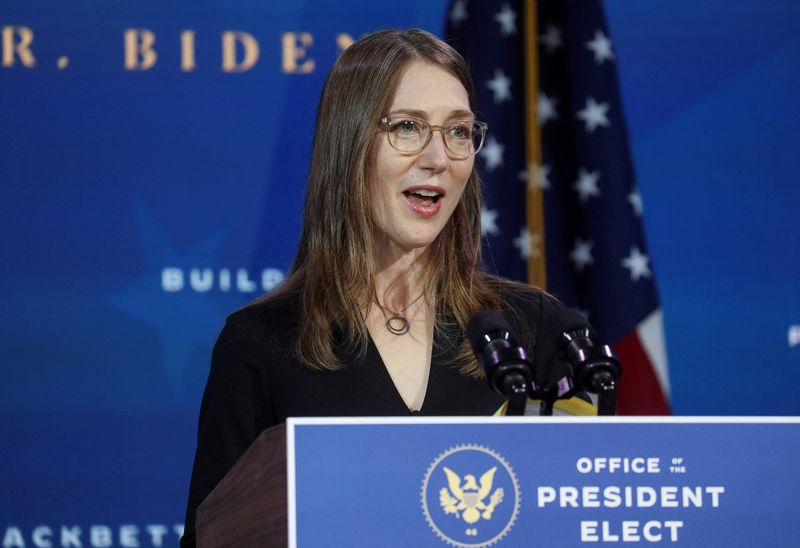 © Reuters. FILE PHOTO: Heather Boushey, appointed to be a member of the Council of Economic Advisers, speaks as U.S. President-elect Joe Biden announces nominees and appointees to serve on his economic policy team at his transition headquarters in Wilmington, Delawa

Boushey welcomed Friday's data that showed the U.S. economy adding jobs at a solid clip in December, with the unemployment rate dropping to a pre-pandemic low of 3.5%, and said the biggest challenge facing the economy now was the ongoing tightness in labor supply.

Asked whether the United States could avoid a recession, Boushey said, "There are no indications that that is where we are now.

"The steps have been taken and it looks like we are in a very good position to have that soft landing that everyone is talking about," she said.

A soft-landing is the ideal Federal Reserve policy goal after raising interest rates, a situation in which inflation slows but there are not enough job losses to trigger a recession.

Other challenges include the impact of the war in Ukraine on energy prices and ongoing COVID risks, especially with China's shifting away from its zero-COVID policy, Boushey said.

Boushey said she worried that challenges finding affordable care for children, the elderly and the disabled were still keeping men and women out of the labor force. The Biden administration had hoped to enact reforms to fund universal preschool and ensure improvements, but failed to win sufficient support in Congress.

Still, supply chain issues driving inflation higher have been addressed and prices looked likely to continue to ease, she said.

"The data that keeps coming out month after month shows that we continue to move forward. The evidence is not consistent with what a recession typically looks like," she said. "The signs all point to ongoing recovery and robustness in the labor market."