US Income Inequality Rose to Record During Biden’s First Year 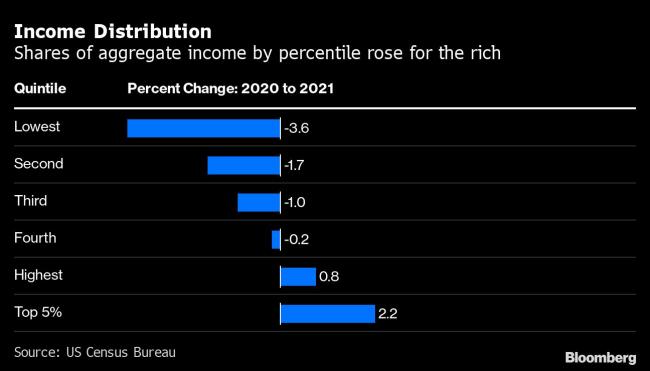 (Bloomberg) -- A key mea­sure of US income inequality rose to a new record in 2021, the first year of President Joe Biden’s term.

The so-called Gini Index rose by 1.2% last year to 0.494, according to data released Tuesday by the US Census Bureau. The index measures how income is distributed, with a value of 0 representing perfect equality while 1 indi­cates absolute inequality.

The same report showed the US poverty rate climbed for a second straight year in 2021 and household income slipped slightly. Last year, 37.9 million people were in poverty, about 3.9 million more than in 2019.

Last year, the share of income flowing to the bottom four quintiles -- or the lower 80% of households -- shrank, while more income reached those among the top 20%. In particular, 23.5% of total income went to the top 5% compared with 23% in 2020. Seen differently, a household in the top 10% makes about 11 times more than a household in the bottom 10%.