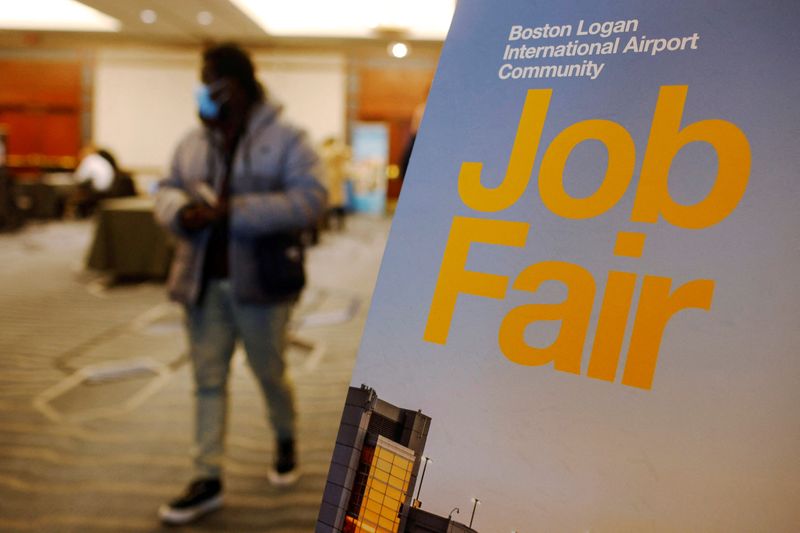 WASHINGTON (Reuters) - The number of Americans filing new claims for unemployment benefits held below pre-pandemic levels last week as the labor market tightens, while consumer spending increased solidly, putting the economy on track for a strong finish to 2021.

The economy's stamina demonstrated in Thursday's data, which also showed new home sales racing to a seven-month high and manufacturing still buoyant in November, came as the nation was battling a resurgence in COVID-19 infections, driven by the Delta strain and the highly transmissible Omicron variant. That could hurt economic activity in the first quarter.

"The economy was running on all cylinders in the fourth quarter," said Diane Swonk, chief economist at Grant Thornton in Chicago. "The bad news is that much of the weakness associated with the spread of the Omicron variant is still ahead of us. Some of the weakness could show up in data for December, but the bulk of the weakness will show up as canceled events, travel and less spending on services in January."

Initial claims for state unemployment benefits were unchanged at a seasonally adjusted 205,000 for the week ended Dec. 18, the Labor Department said. Early this month, claims dropped to 188,000, the lowest level since 1969. Last week's claims were in line with economists' expectations.

Claims have declined from a record high of 6.149 million in early April of 2020. Applications typically increase during the cold weather months, but an acute shortage of workers has disrupted that seasonal pattern, resulting in lower seasonally adjusted claims numbers in recent weeks.

"Looking past that noise, however, we expect claims to remain around 200,000 as layoffs remain low amid tight labor market conditions," said Nancy Vanden Houten, lead U.S. economist at Oxford Economics in New York. "The spread of the Omicron variant may lend an upside risk to that forecast, but for now, it appears as though businesses are striving to remain open."

The claims data covered the period during which the government surveyed businesses for the nonfarm payrolls portion of December's employment report.

Claims dropped between the November and December survey periods, suggesting a pickup in job growth this month. Labor shortages, however, remain a challenge. There are hopeful signs that unemployed Americans are starting to rejoin the workforce, but soaring coronavirus infections could be an obstacle.

The number of people continuing to receive benefits after an initial week of aid fell 8,000 to 1.859 million in the week ended Dec. 11. That was the lowest level for the so-called continuing claims since mid-March of 2020. About 2.138 million people were receiving unemployment checks under all programs in early December, down 320,452 from the end of November.

Stocks on Wall Street rose for a third straight session. The dollar was steady against a basket of currencies. U.S. Treasury prices fell.

The tight labor market is underscored by an unemployment rate that is at a 21-month low of 4.2%. There were a record 11.0 million job openings at the end of October.

A separate report from the Commerce Department on Thursday showed consumer spending, which accounts for more than two-thirds of U.S. economic activity, rose 0.6% last month after shooting up 1.4% in October. Services surged 0.9%, accounting for nearly all the gain in spending. The broad increase in services was led by housing and utilities.

A 0.4% increase in personal income, driven by a 0.5% rise in wages, helped to fund some of the spending, though high inflation cut into income gains. Consumers also relied on savings, resulting in the saving rate falling to a still-high 6.9% from 7.1% in October.

Inflation accelerated in November, with the personal consumption expenditures (PCE) price index, excluding the volatile food and energy components, rising 0.5% after a similar gain in October. In the 12 months through November, the so-called core PCE price index jumped 4.7%, the largest increase since February 1989. It advanced 4.2% year-on-year in October.

"Although consumers say they are anxious about inflation, the outlook for household spending growth in 2022 is solid," said Gus Faucher, chief economist at PNC Financial (NYSE:PNC) in Pittsburgh, Pennsylvania. "Consumers have an extra $2 trillion saved up relative to before the pandemic, thanks to government aid in 2020 and 2021 and limited opportunities to spend."

Higher prices meant inflation-adjusted consumer spending was flat after increasing 0.7% in October. Despite the unchanged so-called real consumer spending last month, economic growth is expected to have accelerated in the fourth quarter, given strong gains in the prior months.

"The inflation tiger needs to be tamed back into its cage primarily by addressing significant bottlenecks and barriers in the transportation and shipping industries which are preventing products from getting to the consumer," said Brian Bethune, professor of Practice at Boston College.

Growth forecasts for the fourth quarter are as high as a 7.5% annualized rate. The economy grew at a 2.3% pace in the third quarter. It is expected to grow 5.6% this year, which would be the fastest since 1984, according to a Reuters survey of economists. The economy contracted 3.4% in 2020.