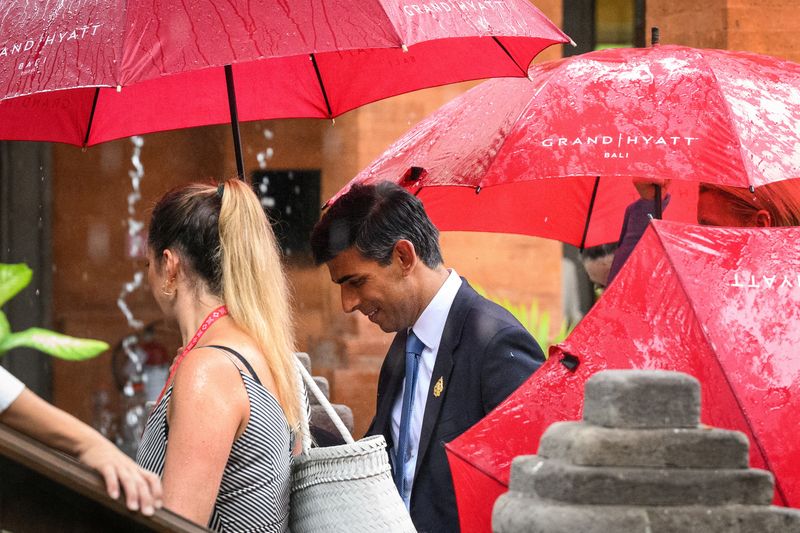 © Reuters. British Prime Minister Rishi Sunak walks through the heavy rain after holding a news conference with Prime Minister Justin Trudeau of Canada at the G20 summit on November 16, 2022 in Nusa Dua, Indonesia. The G20 meetings are being held in Bali from Novemb

NUSA DUA, Indonesia (Reuters) -British Prime Minister Rishi Sunak expressed optimism on Wednesday that Britain and the United States could deepen their economic relationship but he said he had not spoken specifically about a trade deal with U.S. President Joe Biden.

London once viewed a free trade deal with the United States as the one of the biggest prizes for leaving the European Union. But hopes of a quick agreement were dashed when the Biden administration put all free trade talks on ice.

At a G20 meeting, Sunak said he "didn't discuss the trade deal in particular" with Biden, but had spoken about economic cooperation, particularly on energy.

"I am filled with optimism about our ability to do more trade with the U.S., to deepen our economic relationship. That can happen in lots of different ways," Sunak told a news conference.

Trade minister Kemi Badenoch was in Washington this week and said it was "no secret" Britain wanted a comprehensive free-trade agreement with the United States.

But with talks over a trade deal on ice, London and Washington have instead settled for a strategic dialogue to expand the trading relationship and a focus on signing memorandums of understanding with individual states.

Sunak has indicated he will take a different approach to trade deals to his predecessor Liz Truss, who was prime minister for a few weeks but set the tone for Britain's negotiations as trade minister.

Following criticism of the deals Britain has struck since leaving the EU, Sunak has said he will not rush talks with countries like India. Talks with India did not yield a deal by the Diwali deadline set by former prime minister Boris Johnson.

"My approach will be one where we don't sacrifice quality for speed," Sunak said, adding he remained "committed to" getting a deal with India. "I want to take the time to get trade deals right."