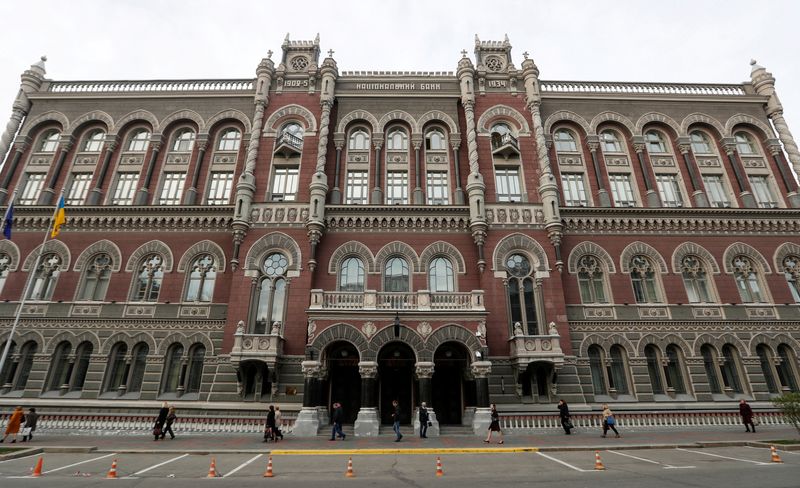 KYIV (Reuters) - Ukrainian inflation, currently at a four-year high of 10.3%, will slow this year but likely remain above the central bank's 5% target due to high food and gas prices, a Reuters poll of analysts showed on Wednesday.

The National Bank of Ukraine (NBU) raised interest rates five times in 2021 to 9.0% after it cut rates to an historic low in 2020 to support an economy reeling from the COVID-19 pandemic.

The NBU is also weighing the risks of a major military confrontation with Russia. A build-up of Russian troops and military hardware near Ukraine's borders has alarmed Kyiv and its Western allies.

Analysts from Ukrainian banks and brokerages see 2022 inflation at 6.7% compared to an estimated 10.2% in 2021, the Reuters poll showed.

"Inflation remains above the central bank's target due to a combination of supply and demand-side factors," said Vitaliy Vavryshchuk from the ICU brokerage, adding that food prices remained the key driver.

"Prices for grains and oilseeds are 20-30% above last year's levels, which also feeds into prices of meat and dairy products," said Vavryshchuk.

"We see two main risks to price stability: high energy prices (especially gas) and the continuation of the tense situation on the border with Russia," said Konstantin Fastovets from Adamant Capital.

"It will be very difficult for the central bank to deal with both factors," he added.

Gas prices doubled in Ukraine in April-September compared to the same period of 2020.

The government capped tariffs for households during the winter heating season that runs until April. But analysts expect the caps to be lifted in line with the government's reform commitments to the International Monetary Fund under a $5 billion deal.