UK tells EU: Without flexibility, we will act on N.Ireland 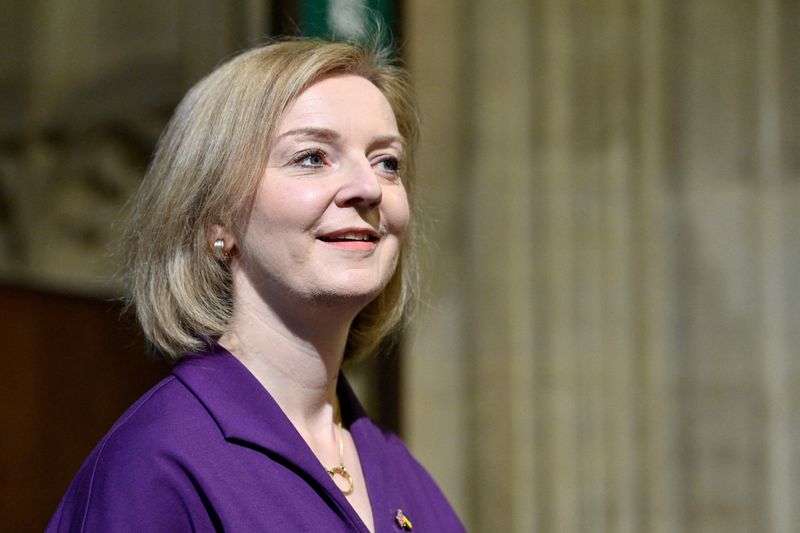 © Reuters. FILE PHOTO: Britain's Foreign Secretary Liz Truss reacts as she walks through the Central Lobby at the Palace of Westminster, ahead of the State Opening of the Parliament, at the Houses of Parliament, in London, Britain May 10, 2022. Justin Tallis/Pool vi

By William James and Elizabeth Piper

LONDON (Reuters) -Britain will have no choice but to take action unless the European Union shows more flexibility in talks over trade rules for Northern Ireland, Foreign Secretary Liz Truss said on Thursday, in the latest escalation of a post-Brexit dispute.

Her warning to the European Commission's Maros Sefcovic is the latest in a steady drumbeat of threats that could end with London introducing legislation to disapply the so-called protocol that governs trade in the British province.

Striking a deal that preserved peace in Northern Ireland and protected the EU's single market without imposing a hard land border between the British province and EU member state Ireland, or a border within the United Kingdom, was always the biggest challenge for London as it embarked on its exit from the bloc.

Prime Minister Boris Johnson's government agreed to a protocol which instead created a customs border in the sea between Northern Ireland and the rest of the UK, but it now says the attendant bureaucracy is intolerable.

The Conservative government has been threatening to rip up the protocol for months, raising the risk of a trade war with Europe at a time of soaring inflation and prompting concern across Europe and in Washington.

In a call with European Commission vice-president Sefcovic, Truss again argued that a lack of agreement on the Northern Ireland protocol was threatening a 1998 peace deal, which largely ended decades of sectarian violence between nationalists backing unification with Ireland and pro-British unionists.

"The Foreign Secretary...said the situation in Northern Ireland is a matter of internal peace and security for the United Kingdom, and if the EU would not show the requisite flexibility to help solve those issues, then as a responsible government we would have no choice but to act," a British statement said.

"Vice President Sefcovic confirmed that there was no room to expand the EU negotiating mandate or introduce new proposals to reduce the overall level of trade friction."

Truss noted this "with regret", the statement said.

In what appeared to be a coordinated approach, Britain's minister for the cabinet office, Michael Ellis, is expected to tell the European Parliament later on Thursday it is "hugely disappointing" that the EU will not change its mandate.

At the heart of the dispute are two opposing approaches to what was signed in 2020 as part of Britain's Brexit withdrawal agreement with the EU.

Brussels says the agreement was signed in good faith and any renegotiation is out of the question. London says that when it was signed, there was an understanding that some changes might be needed if there were any trade problems for Northern Ireland.

On Wednesday, Irish Foreign Minister Simon Coveney said the EU would launch legal action and possibly impose countermeasures if London took unilateral action. He added that the news had "gone down really badly" across the EU.

A Conservative source said the move to announce domestic legislation which would effectively suspend the protocol could come on Tuesday after a possible announcement by the prime minister a day earlier.

Downing Street has repeatedly declined to say what action the government would take to break the deadlock.

But any such move to legislate to disapply the protocol could take time, having to pass both the lower and upper house of parliament.