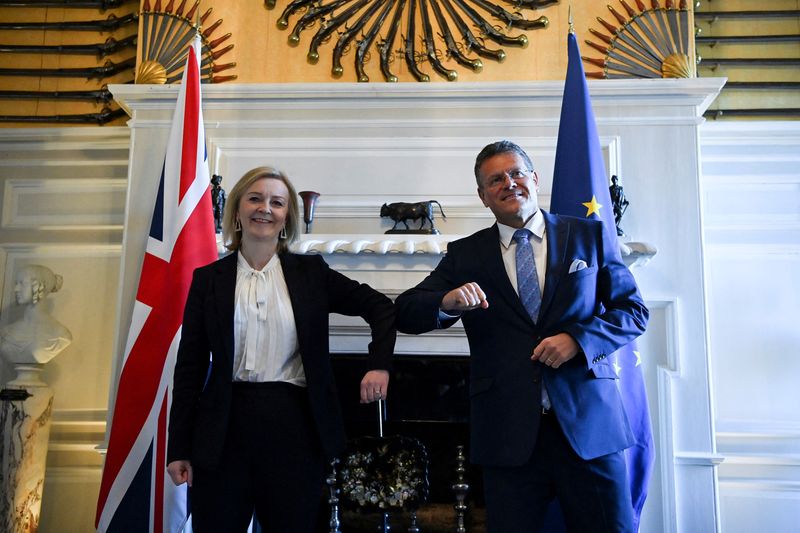 LONDON (Reuters) -Britain and the European Union said on Friday they would intensify negotiations to resolve post-Brexit trade issues, with British foreign minister Liz Truss saying there was a deal to be done.

After hosting European Commission Vice-President Maros Sefcovic for "good talks" at her country residence, Truss said she wanted to make progress on sorting out problems with the implementation of the rules governing trade between Britain, its province Northern Ireland, and EU-member Ireland.

"What I want is a negotiated solution, I think there is a deal to be done. We have had constructive talks over the last day," Truss told reporters.

Officials from the two sides will now meet for intensified discussions next week, before Truss and Sefcovic hold another meeting on Jan. 24.

Sefcovic also welcomed the talks, but said it was now time to "start taking issues off the table". He said he believed the EU had put forward "good proposals and good solutions".

Truss last month took over the long-running negotiations to resolve the disagreements on post-Brexit trade rules for Northern Ireland - which Britain signed up to but now says are not workable in practice.

The EU says it has put forward solutions to reduce customs paperwork and checks on agri-food products, but Britain says it does not want a system which allows checks on goods moving solely within the United Kingdom, and does not want an arbitration role for the EU's European Court of Justice.

A survey by trade body Manufacturing NI showed that for the first time more businesses in the province had reported no impact from the protocol than those experiencing disruption.

"Manufacturers are overcoming issues and those who can are increasingly grasping opportunities presented by Northern Ireland's unique status by picking up more business in Britain and in the EU," the survey's authors said.

However, Britain has repeatedly threatened to invoke Article 16 of the Brexit divorce treaty allowing it to take unilateral action that would suspend customs checks on goods moving to Northern Ireland.

"Clearly, if we don't make sufficient progress, we will have to look at the alternatives but my absolute desire is to get a deal that works for people," Truss said.

Asked about the threats, Sefcovic said that from their discussions, he believed Truss preferred a "negotiated solution".