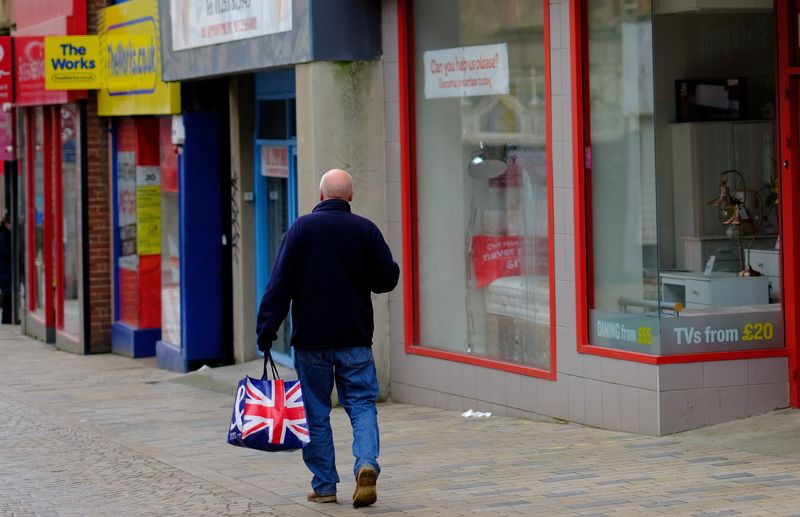 LONDON (Reuters) -British retail sales fell much more than expected in August, in another sign that the economy is sliding into recession as the cost of living crunch squeezes households' disposable spending.

Retail sales volumes dropped by 1.6% in monthly terms in August, the Office for National Statistics said - the biggest fall since December 2021 and worse than all forecasts in a Reuters poll of economists that had pointed to a 0.5% fall.

The data are likely to add to worries about the strength of demand in Britain's economy. UK fashion retailers Primark and ASOS (LON:ASOS) and online supermarket Ocado (LON:OCDO) Retail have all warned about their profits this month.

The pound slid further towards $1.14 on the back of the data.

"With a difficult winter to come, it will come as a worry to retailers that shoppers have already reigned in their spending despite the hot summer," said Lynda Petherick, retail lead at Accenture (NYSE:ACN).

All of the main retail sectors - food stores, non-food stores, non-store retailing and fuel - fell over the month for the first time since July 2021, when COVID-19 restrictions on hospitality were lifted, the ONS said.

The period of mourning following the death of Queen Elizabeth poses another challenge to retailers, with widespread business closures due on Monday to mark the queen's funeral.

"The sombre atmosphere in the UK this week and news of slow economic growth will be adding to the sense of concern among retailers as the weather gets colder," Petherick said.

Although inflation dipped below 10% last month, households are still grappling with the biggest price increases since the early 1980s, caused mostly by surging energy prices in the aftermath of Russia's invasion of Ukraine.

"Feedback from retailers suggests that consumers are cutting back on spending because of increased prices and affordability concerns," it said.