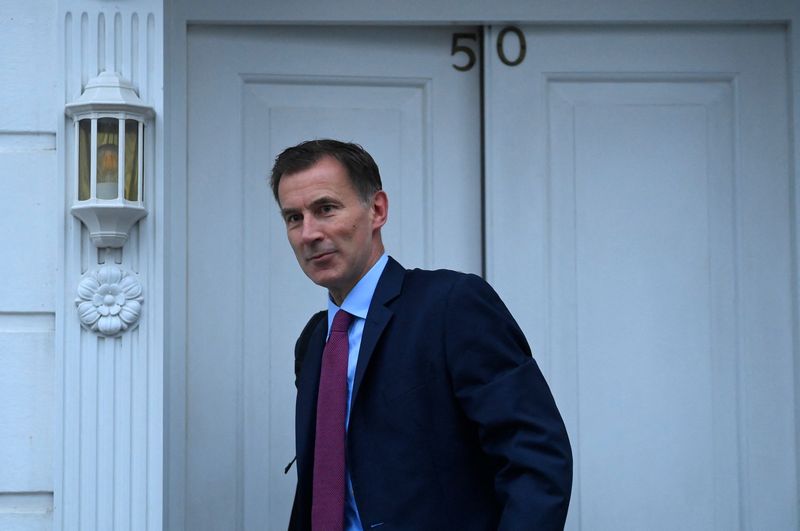 LONDON (Reuters) - Britain's economy is forecast to shrink next year, finance minister Jeremy Hunt said as he began outlining how he and Prime Minister Rishi Sunak will raise taxes and cut spending to repair the public finances, despite the grim outlook.

The new forecast is for gross domestic product to contract by 1.4% next year compared with a projection for growth of 1.8% in the previous outlook published in March by the Office for Budget Responsibility (OBR).

Since then, Britain's economy has come under strain from an inflation rate now above 11%, a slowing global economy and political and severe financial market volatility during Liz Truss's brief term as prime minister.

Hunt said the OBR forecasts laid out "starkly the impact of global headwinds on the UK economy" as he started a speech to parliament on Thursday.

Hunt and Sunak have said they will restore investor confidence in Britain after the failed "Trussonomics" experiment with unfunded tax cuts that sent the pound to an all-time low against the U.S. dollar, threatened chaos in the housing market and forced Truss to quit after just 50 days in Downing Street.

Hunt said the OBR judged that Britain - where high inflation is creating a cost-of-living crisis - is already in recession. It is the only Group of Seven nation yet to recover its pre-pandemic size, having previously suffered a decade of near-stagnant income growth.

Hunt had warned of more pain in his budget statement in the days leading up to Thursday's announcement.

He has said he can only slow the rise in borrowing costs if he can show investors that Britain's 2.45 trillion-pound ($2.91 trillion) debt mountain will start to fall as a share of economic output.

Critics have warned against a return to the kind of tight controls on spending pursued by the ruling Conservative Party for much of the past 12 years, saying it will hurt already stretched public services and the lives of millions of households, deepening the expected recession in the process.