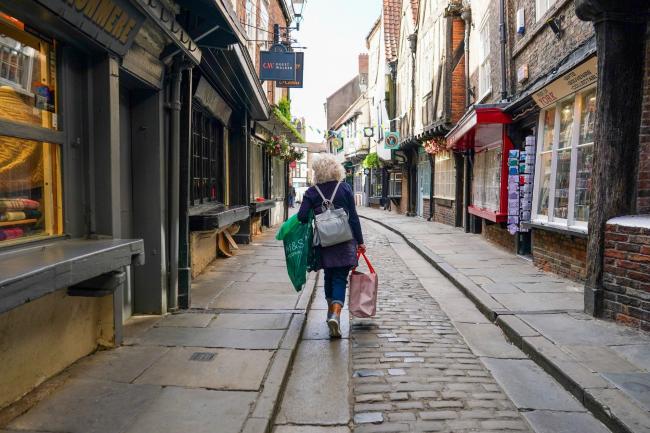 © Bloomberg. A shopper walks along the Shambles in York, UK, on Monday, June 20, 2022. On Wednesday, inflation is set to rocket to a new 40-year high with the cost of goods leaving factories already racing ahead at a double-digit pace.

(Bloomberg) -- UK consumer confidence dropped to a record low as surging prices, a squeeze on incomes and disruption from strikes took a toll on the national mood.

The market research firm GfK Ltd. said its measure of sentiment dropped 1 point to minus 41 in June, the lowest reading in the 48 years of the survey. The risk of recession weighed on consumers’ view of the future outlook both for their own finances and the broader economy.

The figures show the deep damage that the fastest inflation rate since the 1980s is having on the economy. With wages failing to keep pace with rising prices, consumer finances are being squeezed and leading to a more gloomy outlook than during the depths of the coronavirus pandemic.

The prospects of a summer of industrial action and soaring interest rates are also weighing heavily on the mood of the nation, with the Bank of England indicating it is prepared to sacrifice economic growth to lean against higher prices.

“Britain faces a stark new economic reality,” said Joe Staton, client strategy director at GfK. “History shows that consumers will not hesitate to retrench and tighten their purse strings when the going gets tough.”

The reading is particularly bad news for Prime Minister Boris Johnson as the survey is the first since the government announced a multi-billion pound package of support for households to help them cope with soaring energy bills. The latest drop suggests even that unprecedented aid is not enough to bolster sentiment.

With the economy already on track to shrink in the second quarter, the risk is that ebbing confidence weighs further on spending, delivering a recession later this year.

More pain also lies ahead, with the BOE predicting inflation will climb above 11%, more than five times its target, as more energy bill hikes kick in come October.

“As essential costs continue to rise, as does the risk that further discretionary goods demand reduces in line with the consistently low levels of consumer confidence that we are seeing,” said Linda Ellett, UK head of consumer markets, retail and leisure at KPMG,