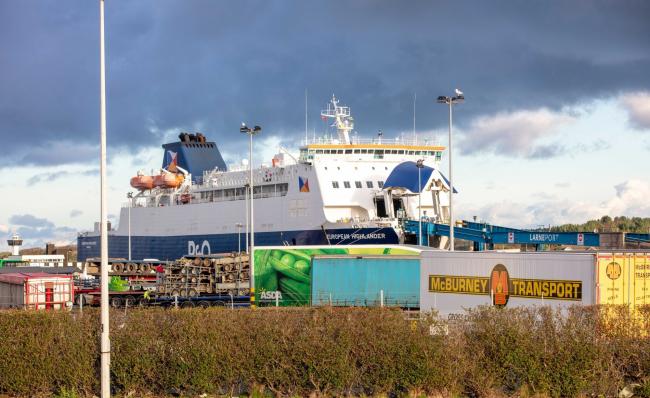 © Bloomberg. Haulage trucks near the European Highlander ferry, operated by P&O Ferries Ltd, at Larne Port in Larne, Northern Ireland, U.K., on Monday, Dec. 7, 2020. U.K. Prime Minister Boris Johnson warned a time may be coming to recognize that Brexit negotiations have failed, as he prepares to travel to Brussels for crisis talks on a future trade deal. Photographer: Paul Faith/Bloomberg

(Bloomberg) -- The European Union and the UK are preparing to enter an intense phase of negotiations starting next week aimed at overcoming the dispute over the post-Brexit trading relationship well ahead of the anniversary of Northern Ireland’s peace agreement in April, according to people familiar with the matter.

The aim is to move into a negotiating “tunnel” after UK foreign minister James Cleverly and European Commission Vice-President Maros Sefcovic take stock of talks on Jan. 16, said the people, who spoke on condition of anonymity to discuss private talks.

Cleverly and Sefcovic announced earlier this week that the EU had agreed to use the UK’s live database tracking goods moving from Great Britain to Northern Ireland. This was a first sign of progress in a long-running dispute on post-Brexit trading rules and a step that paves the way for negotiations on other more complex issues, such as checks on agri-food goods, state aid and VAT.

Other outstanding issues include disagreement over the governance of the Northern Ireland protocol, with the UK demanding that the European Court of Justice be totally stripped of its role in settling Brexit disputes in the region. That remains a red line for the EU.

Stephen Kelly, CEO of Manufacturing NI, said after talks with Cleverly this week that he expected the UK and EU would announce “a deep scoping exercise, deep conversation — what’s traditionally known as a tunnel” after Cleverly and Sefcovic meet on Jan. 16.

The two sides are hoping to unlock an agreement by the end of next month, ahead of the April anniversary of the 1998 Belfast peace agreement, Bloomberg previously reported.

The dispute stems from the original Brexit deal, when both sides agreed to avoid a land border on the island of Ireland. The mechanism to that effectively placed a frontier in the Irish Sea, and allowed Northern Ireland to remain in the bloc’s single market and customs arrangements. The UK has so far failed to implement parts of those accords and in response the EU has opened several infringement procedures.