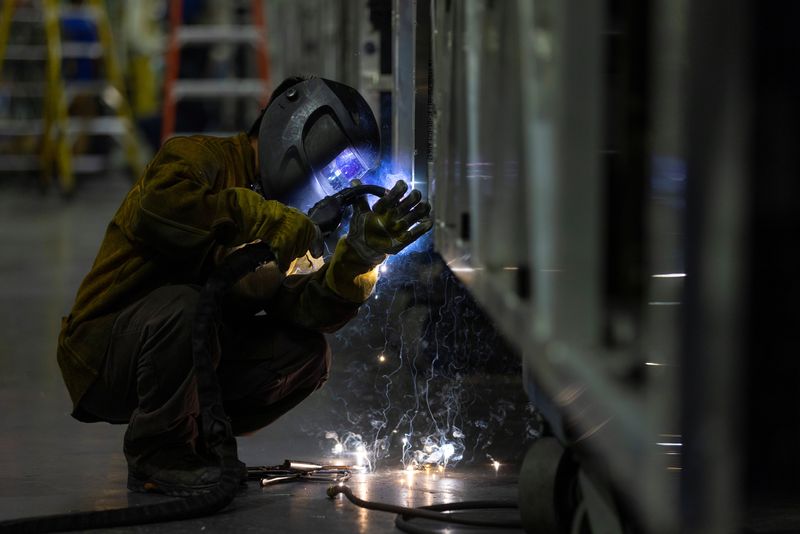 Other data on Friday showed consumer spending accelerating in June, though the uptick was tied to higher costs for gasoline as well as a range of other goods and services, with monthly prices surging by the most since 2005. Soaring inflation contributed to the economy's 1.3% contraction in the first half of this year, leaving it on the brink of a recession.

"The Fed will continue to grapple with trying to tame inflation without tipping the economy into a recession," said Dante DeAntonio, an economist at Moody's (NYSE:MCO) Analytics in West Chester, Pennsylvania "The data on wage and price growth will not do them any favors as upward pressure clearly remains even as the overall economy has weakened."

The Employment Cost Index, the broadest measure of labor costs, increased 1.3% last quarter after accelerating 1.4% in the January-March period, the Labor Department said. Economists polled by Reuters had forecast the ECI would rise 1.2%.

The ECI is widely viewed by policymakers and economists as one of the better measures of labor market slack and a predictor of core inflation, as it adjusts for composition and job-quality changes. Data on Thursday showing the economy contracted again in the second quarter led economists and investors to believe that the Fed would slow its pace of rate hikes in September.

The U.S. central bank on Wednesday raised its policy rate by another three-quarters of a percentage point. It has now hiked that rate by 225 basis points since March.

Employment costs were fueled by strong wage gains. Wages and salaries shot up 1.4% after rising 1.2% in the first quarter. They were up 5.3% on a year-on-year basis, also the largest rise since the current series began in 2001.

The private sector was the main driver of the increase, with wages and salaries there notching a 1.6% increase, up from 1.3% in the January-March period.

The advance in wages occurred across all industries, with hefty gains in the traditionally low-paying leisure and hospitality sector as well as retail industries. Private sector wages rose 5.7% from a year ago, also the biggest gain in the series.

Stocks on Wall Street were trading higher following upbeat forecasts from Apple (NASDAQ:AAPL) and Amazon (NASDAQ:AMZN). The dollar slipped against a basket of currencies. U.S. Treasury prices were mixed.

There were 11.3 million job openings at the end of May, with nearly two open positions for every unemployed person.

A slowdown in annual growth in average hourly earnings in the first half of the year had raised expectations of a peak in wage gains. Benefits increased 1.2% in the second quarter and were up 4.8% on a year-on-year basis.

"The second-quarter employment cost data doesn't provide any evidence that wage growth is slowing and leaves the Fed on track to lift the funds rate another 75 basis points at its September meeting," said Nancy Vanden Houten, lead U.S. economist at Oxford Economics in New York.

In a separate report on Friday, the Commerce Department said consumer spending, which accounts for more than two-thirds of U.S. economic activity, rose 1.1% last month after gaining 0.3% in May. Economists had forecast consumer spending would accelerate by 0.9%.

The data was included in the advance gross domestic product report for the second quarter, published on Thursday. The economy contracted at a 0.9% annualized rate last quarter after shrinking at a 1.6% pace in the first quarter.

Excluding the volatile food and energy components, the PCE price index shot up 0.6% after climbing 0.3% in May. The so-called core PCE price index increased 4.8% on a year-on-year basis in June after rising 4.7% in May.

These measures are closely tracked by Fed officials for the central bank's 2% inflation target. There are, however, signs that inflation could be peaking. A third report from the University of Michigan on Friday showed consumers' inflation expectations slipped in July.

Soaring prices in June saw inflation-adjusted consumer spending rebounding by a feeble 0.1% after falling 0.3% in May. This puts consumer spending on a weak growth trajectory heading into the third quarter after rising at its slowest pace in two years in the April-June quarter.

"The tug of war on consumer purse strings is slowly being won by the bad guys, high inflation, rising borrowing costs, and dismal confidence," said Sal Guatieri, a senior economist at BMO Capital in Toronto.