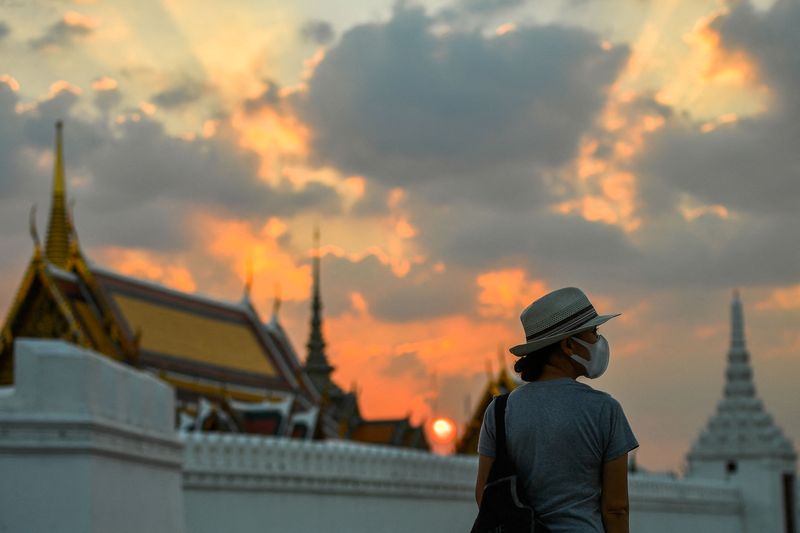 © Reuters. FILE PHOTO: A tourist wears a face mask to prevent spread of the coronavirus disease (COVID-19) during sunset near the Grand Palace in Bangkok, Thailand, January 7, 2022. REUTERS/Chalinee Thirasupa

BANGKOK (Reuters) - A shift by Thailand's central bank to a more hawkish footing this week stunned markets and appeared to finally end policymakers' tolerance for mounting price pressures, but a range of risks are likely to keep any tightening gradual.

The Bank of Thailand kept its benchmark interest rate at a record low on Wednesday but a split vote on the decision was a signal to markets that the central bank may raise interest rates as soon as August.

Thailand has been among Asia's least hawkish central banks, maintaining its policy focus on supporting an economy still struggling with the pandemic -- particularly a lack of Chinese tourists -- and insisting supply-driven inflation is better dealt with through fiscal measures and price controls, not rates.

Kobsidthi Silpachai, head of capital markets research of Kasikornbank, expects the BOT to raise rates in August by 25 basis points to 0.75%, but believes such tightening would mostly be a symbolic gesture to markets more than an attempt to tackle inflation.

"A hike is purely ceremonial to avert criticism that it's stuck in neutral gear," he said. "Similar to the Fed, they don't want to be caught behind the curve."

Three of the BOT's seven committee members voted for a rate hike this week, a contrast to its August meeting at which two members voted for a cut. Kobsidthi said the board's new concern about inflation may not endure if threats to economic growth take precedence.

Other analysts see conviction in the central bank's acknowledgement of inflation as an issue, and have added a series of rate hikes to their projections for this year from none previously.

But they still see limits to the pace of tightening given the fragile business environment.

"If the expected rate hikes disrupt the recovery or the global economy faces a severe slowdown, the BOT may choose to hit the brakes (on hikes)," Tisco Group economist Thammarat Kittisiripat said.

He expects a quarter-point rate hike at each of the remaining three meetings this year, taking the rate to 1.25%.

Policymakers have promised that fiscal and monetary settings will continue to support the nascent recovery with vital tourism lagging without Chinese tourists, who are unable to visit due to strict COVID-19 curbs that ban outbound travel.

China accounted for over a quarter of the 40 million foreign visitors in pre-pandemic 2019.

The BOT predicts 6 million foreign tourist arrivals this year and 19 million next year as COVID-19 curbs ease. It forecasts economic growth of 3.3% this year, after 1.5% growth last year, among the lowest in the region.

In contrast to past global tightening cycles, Thailand's capital markets remain in good shape thanks to much higher foreign reserves and low foreign debt, reducing any immediate pressure to match U.S. rate hikes.

Thailand has not seen any net capital outflows this year - instead, its bond and stock markets have drawn net inflows of 157 billion baht ($4.53 billion).

A weak baht near five-year lows is not considered a major concern for the government, which sees it as good for exports, a great help for the competitiveness of Thailand's massive export sector.

While most other Asian central banks have commenced aggressive monetary tightening to stem rapid price increases, many Thai businesses are yet to come to terms with the prospect.

Kriengkrai Thiennukul, chairman of the Federation of Thai Industries, said smaller firms have yet to recover from the pandemic.

"Raising rates may be necessary but the BOT has to be mindful that it will not add to the burden of business operators and borrowers as debt levels are still high," he said.