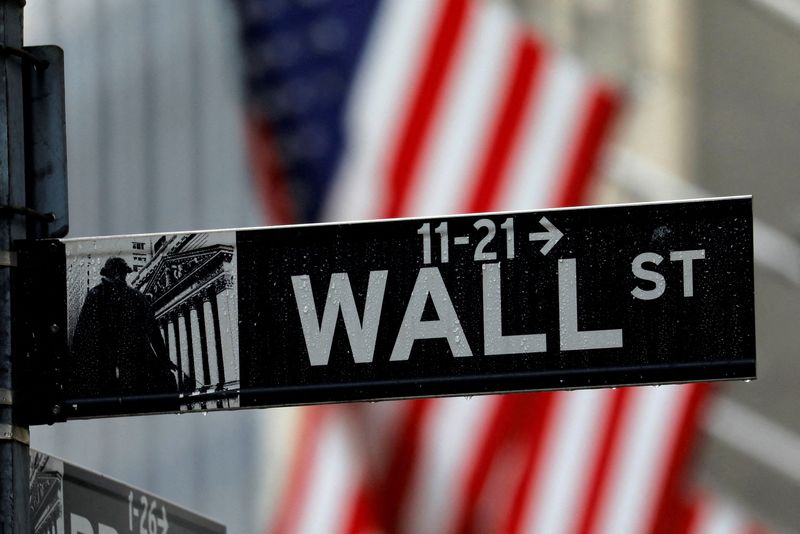 (Reuters) - With U.S. earnings season well underway, banking heavyweights such as Goldman Sachs (NYSE:GS) are lining up to report next. The Bank of Japan is the first major central bank to meet in 2022 and investors get a slew of China data to pour over.

Davos goes virtual for a second year and how long will the pound prove resilient to Britain's rising political uncertainty?

in Tokyo, Vidya Ranganathan in Singapore and Karin Strohecker and Dhara in London.

U.S. earnings season goes into full swing and this time it is the financial sector, with its blistering start to 2022, in focus.

The S&P 500 Financials Index is up almost 6% so far this year, while the broader S&P 500 is down 2%, as investors bet on banks benefiting from new lending and the higher yields https://www.reuters.com/business/rise-real-bond-yields-may-slow-not-stop-stock-market-bulls-2022-01-12 expected to accompany a more aggressive Federal Reserve.

Bank executives are expected to be optimistic on the outlook, whether that is enough to sustain demand for bank shares remains to be seen. As some note, bank stocks often do better ahead of rate hikes than they do during rate increases.

For a related graphic on financial stocks soar in early 2022, click https://fingfx.thomsonreuters.com/gfx/mkt/gkplgbajdvb/Pasted%20image%201642025201594.png

The good news for Bank of Japan officials meeting Jan 17-18: inflation is creeping higher, the economy is picking up.

Consumer prices rose at their fastest pace in nearly two years in November. Even Japan's giant of affordable attire, Uniqlo says it has no choice but to raise prices - a change in a nation where deflation is the norm and firms deal with any rise in costs by tightening belts rather than passing them on.

The bad news? Inflation is rising for the wrong reasons.

Instead of being the fruit of nearly a decade of super-charged monetary stimulus, rising prices are driven by surging energy prices and a weakening yen.

The challenge is preventing rising living costs from hurting weak household spending and a fragile recovery. So, the BOJ may debate how soon it can start telegraphing a rate hike but will also pledge to continue ultra-easy policy this year.

For a related graphic on Japan's yields and inflation ticking higher, click https://fingfx.thomsonreuters.com/gfx/mkt/gkplgxolqvb/Pasted%20image%201635491680033.png

Data on Monday should confirm China's economy stabilised in Q4, rebounding from power outages and coronavirus setbacks and pushing 2021's growth to 8%.

Stop-go efforts at easing monetary conditions is a key focus for investors, alongside whether policymakers can balance cleaning up a bloated property sector while containing stress on home buyers and suppliers.

With the Chinese New Year holiday in early February and the Winter Olympics in Beijing soon after, the central bank will be inclined to keep banks and markets flush with cash China's overnight money rate jumps to 4-mth high, policy rate in focus.

For a related graphic on China growth slowing, click https://fingfx.thomsonreuters.com/gfx/mkt/myvmngkjzpr/Pasted%20image%201634212277756.png

For a second year, world leaders, policy makers and top corporate chiefs bound for the World Economic Forum (WEF) in the Swiss ski resort of Davos on Jan. 17-21 will tuck away snow boots and hop on video calls to tackle the world's big challenges.

The mood is glum: Only one in 10 WEF members surveyed expects the global recovery to accelerate over the next three years, with only one in six optimistic about the world outlook.

Climate change is seen as the number one danger while erosion of social cohesion, livelihood crises and deterioration of mental health are seen as the risks that have increased the most due to the COVID-19 pandemic.

Sterling is sailing high thanks to signs the Omicron COVID surge is easing and expectations that British interest rates will likely rise again in February. It is at two-month peaks against the dollar and one the best performing major currencies early in 2022.

If upcoming data boosts rate hike bets, currency bulls will have another reason to push sterling higher. November jobs numbers are out on Tuesday, followed by December inflation on Wednesday and retail sales figures on Thursday.

Meanwhile the pound appears unfazed by growing political uncertainty. Boris Johnson's position as prime minister appears vulnerable after revelations he attended a Downing Street party during a 2020 lockdown. Did not someone say a week is a long time in politics? The same might prove true for trading the pound.