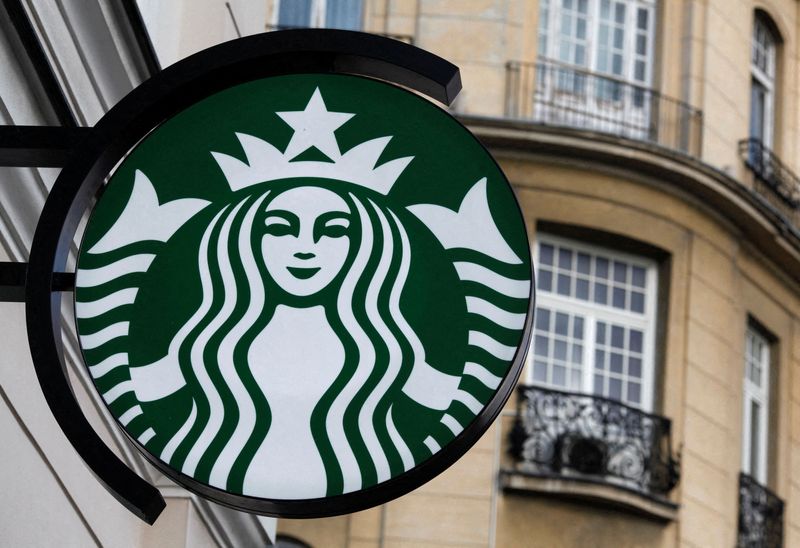 By Praveen Paramasivam and Hilary Russ

Comparable sales in China, where the chain has been rapidly expanding in recent years to tap rising coffee consumption, declined 23%, overshadowing 12% growth in North America.

China's strict lockdown measures to meet its zero-COVID policy have upended operations of most global companies that have a significant presence in the Chinese market, including Apple (NASDAQ:AAPL), Gucci-parent Kering (EPA:PRTP) and Taco Bell-owner Yum China.

"I remain convinced Starbucks (NASDAQ:SBUX)' business in China will be eventually larger than our business in the U.S.," Chief Executive Officer Howard Schultz said in a call with investors.

Given the uncertainty in China and increased investments elsewhere, the company suspended guidance for its third and fourth quarters, Schultz said.

Global comparable sales at Starbucks, which recently brought Schultz back to lead the company at a time when workers at many coffee houses are unionizing, rose 7% in the second quarter, while analysts polled by Refinitiv had expected 7.1% growth.

Schultz said in a call with investors that the company will invest an additional $200 million in fiscal 2022 to lift wages for store managers, increase training, revitalize its "Coffee Master" program for baristas and launch an internal app to communicate directly with its 240,000 U.S. employees.

The company will also accelerate the rollout of new ovens and espresso machines and speed up maintenance and repairs.

The new money will bring total investments in employees to $1 billion this fiscal year alone. The company previously said it is spending about $1 billion in 2021 and 2022 combined to increase salaries for both new workers and longer-term employees. By this summer, average U.S. pay will be $17 an hour, with starting wages to range from $15 to $23.

Schultz also said customers will be able to start adding tips to their credit and debit card purchases by late 2022, something that baristas at unionized stores in Buffalo, New York asked for at the bargaining table.

It was unclear whether newly unionized employees would get the increased benefits.

"At stores where workers have union representation, federal law requires good faith bargaining over wages, benefits and working conditions which prohibits Starbucks from making or announcing unilateral changes," the company said in a statement.

Though Starbucks has already raised wages, more than 50 U.S. cafes have elected to join the Workers United union, while five stores voted against the union, out of roughly 240 altogether that have sought to hold elections since August.

Despite strong U.S. sales, operating margins in North America contracted to 17.1% from 19.3% in the prior year due to higher costs for labor and goods.

Total net revenue rose to $7.64 billion from $6.67 billion a year earlier, as the company opened 313 net new stores during the quarter. Analysts had expected $7.59 billion in quarterly revenue.