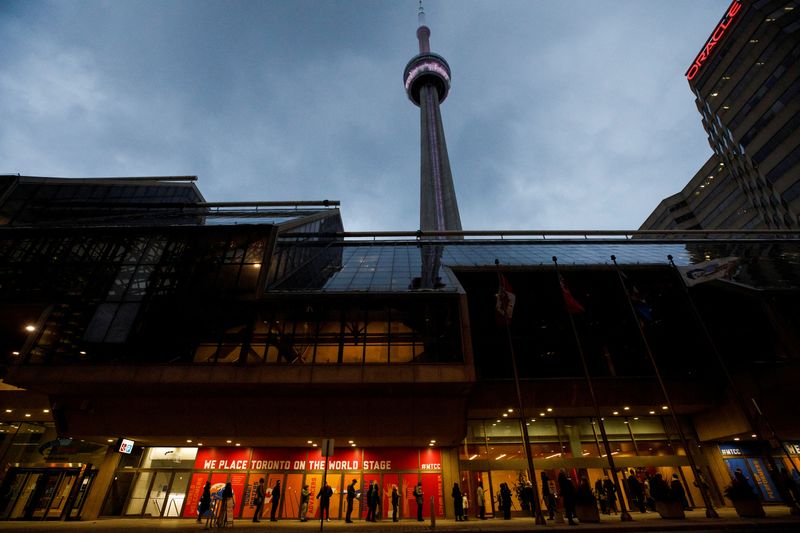 © Reuters. People queue up for their COVID-19 vaccine booster shots at a clinic inside the Metro Toronto Convention Centre, as the latest Omicron variant emerges as a threat, in Toronto, Ontario, Canada December 22, 2021. REUTERS/Cole Burston NO RESALES. NO ARCHIVES

OTTAWA (Reuters) - Canada's urban exodus picked up steam into the second year of the COVID-19 pandemic, with tens of thousands of people leaving Toronto and Montreal for smaller cities or rural areas, official data showed on Thursday.

More than 64,000 people left Toronto for other parts of Ontario from mid-2020 to mid-2021, up 14% from the previous 12-month period, according to Statistics Canada population estimates, with another 6,600 moving out of province.

Montreal, Canada's second largest city, lost nearly 40,000 residents to other areas of Quebec, up 60% on the year, with another 3,600 moving out of province.

The COVID-19 pandemic and the rise of remote work has prompted tens of thousands of Canadians to flee large and expensive cities in search of more space, and cheaper real estate, in small centers, cottage towns and coastal regions.

That has helped drive a nationwide housing boom, with prices rising more sharply in suburbs and small towns than in urban centres, fueling worries locals could be priced out and putting pressure on municipal services.

Atlantic Canada has fared well in the exodus. Halifax, Nova Scotia added more than 6,000 people in the year up to June 30, 2021, with the vast majority arriving from out of province.

Rural Quebec has boomed, adding more than 25,000 people from urban centers within the predominantly French-speaking province.

The cities in the so-called Golden Horseshoe around Toronto are also seeing strong inflows. Oshawa added 8,000 people as residents flowed out of Toronto, and both Hamilton and St. Catharines gained nearly 5,000.