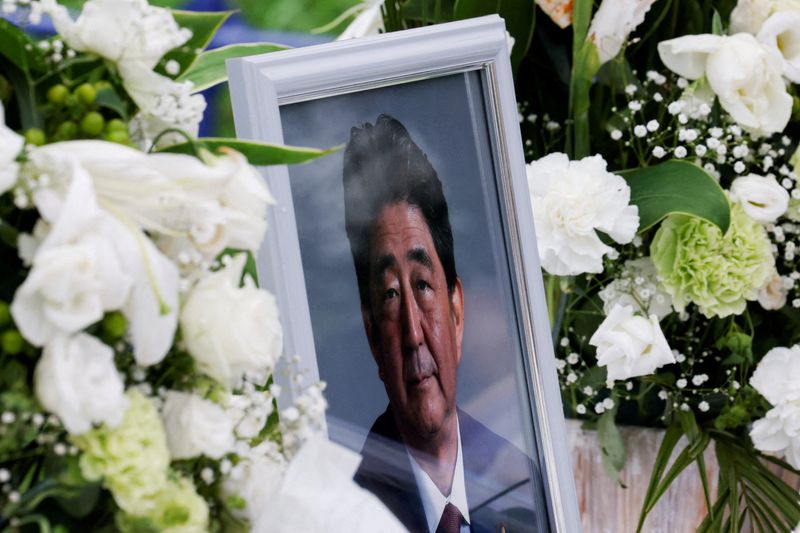 © Reuters. FILE PHOTO: A picture of late former Japanese Prime Minister Shinzo Abe, who was gunned down while campaigning for a parliamentary election, is seen at Headquarters of the Japanese Liberal Democratic Party in Tokyo, Japan July 12, 2022. REUTERS/Kim Kyung-

TOKYO (Reuters) - Just over half of Japanese oppose plans for a state funeral for Shinzo Abe, the former prime minister whose assassination this month shocked the nation, an opinion poll showed on Sunday.

The cabinet decided to hold a state funeral for Abe, Japan's longest-serving but divisive premier, on Sept. 27 at Tokyo's Nippon Budokan.

About 53% of respondents to a Saturday-Sunday Kyodo news agency survey expressed opposition to a state funeral for Abe, exceeding the 45% who favoured a state funeral.

The government of Prime Minister Fumio Kishida, an Abe protege, decided his funeral will be paid by state funds. The last fully state-financed funeral for an ex-prime minister was in 1967, with later ones funded jointly by the state and the Liberal Democratic Party, of which Abe remained an influential member.

The poll found support for Kishida's cabinet dropped 12.2 points to 51.0%, its lowest in Kyodo polling since its inauguration in October.