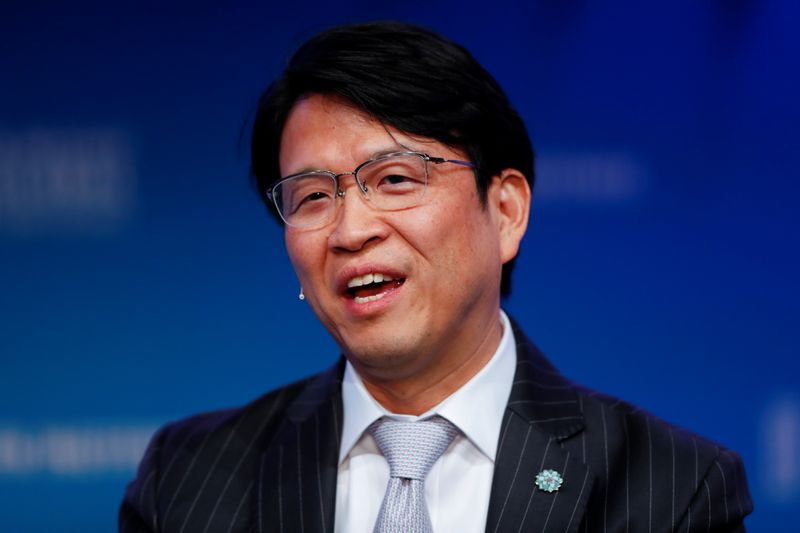 By Ross Kerber and Makiko Yamazaki

BOSTON/TOKYO (Reuters) -Hiromichi Mizuno's connections, spanning from the Japanese government to Harvard University, made him a guiding voice among climate-focused investors worldwide.

Now those ties have placed his own conduct under scrutiny after an independent report focused on Mizuno's role in alleged collusion between the management of Toshiba (OTC:TOSYY) Corp and Japan's trade ministry to block foreign investors from gaining board influence at the conglomerate.

The revelations helped lead to the ouster of Toshiba’s chairman last month.

Mizuno said in a recent interview that he put no pressure on Harvard and only volunteered to help the endowment understand how things worked in Japan. He and government officials have challenged the report's conclusions and said it does not reflect Mizuno's account. [nL2N2O503S]

The dispute highlights the tension between the two strands of Mizuno's career - the champion of sustainable investment and the government insider - at a time when foreign shareholders are trying to judge Japan's receptivity to overseas investment.

Abby Adlerman, an adviser to corporate boards and CEO of Boardspan, a provider of corporate governance software, said it would have been better if Mizuno had recused himself from the talks at Harvard. "All of this recognition and access to information means he is pulled in different directions as to his loyalties and has responsibilities to many parties," she said.

The current situation, she said, is "shuttle diplomacy gone bad."

Mizuno said he only volunteered to help university officials as a part of the Harvard community, where he was about to start an academic fellowship.

“I did what I could to help both Harvard and the Japanese government" make informed decisions, he said.

The report's description of a powerful government insider throwing his weight around contrasts with the civic-minded persona that Mizuno cultivated as chief investment officer of Japan's $1.6 trillion Government Pension Investment Fund (GPIF) and burnished as a Tesla (NASDAQ:TSLA) Inc director.

Mizuno earned an MBA from Northwestern (NASDAQ:NWE) University and joined the GPIF in 2015 from London-based private equity firm Coller Capital.

The post gave him a platform to become a prominent voice pushing for considering environmental, social and governance (ESG) issues in investment decisions.

But his approach caused friction with people concerned GPIF would become actively involved with the Japanese stock market or push beyond its enabling legislation, according to a Harvard Business School case study about his efforts.

Mizuno left the GPIF last year but retained his government connection as a special adviser at Japan's Ministry of Economy, Trade and Industry (METI), holding the position until being named a United Nations special envoy on sustainable investment in December.

"He's got a style which is not traditional, and that sometimes makes people uncomfortable. But he's perceived by the international crowd as an important champion of ESG practices, and that makes him a hero outside of Japan," said Alicia Ogawa, who leads a center focused on Japanese corporate governance at Columbia University.

Mizuno's academic fellowship was at Harvard Business School, distinct from Harvard Management Co., or HMC, which runs the university's $41 billion endowment. HMC held a 4% Toshiba stake, one of the single largest chunks of shares, which drew Toshiba's attention when it sought to lobby investors against outside director candidates last summer.

The company also sought intervention from METI, which could use new foreign investment rules to block the nominees. [L4N2CP1E5]

When that didn't work and HMC declined to meet with Toshiba, METI gave the company Mizuno's name as "someone with connections to HMC," according to the shareholder-commissioned investigation, conducted by three lawyers.

Yet Mizuno would be an unlikely messenger to tell a shareholder to back off, having spent years stressing governance issues.

He once cautioned on Twitter against Japan's foreign investment rules, worried they gave overseas investors "impressions of a setback in corporate governance or anti-shareholder activism."

He told Reuters nobody asked him to deliver messages to HMC, and that he told METI Harvard was not an activist but rather "a very sophisticated long-term investor. I volunteered to talk to Harvard to prove my point. METI didn't stop me."

Masayoshi Arai, Director-General of METI's Commerce and Information Policy Bureau, said that although a METI official gave Mizuno's name to Toshiba, "He simply told Toshiba that Mizuno was being asked by HMC to give advice; he never said Toshiba should ask Mizuno or METI would ask Mizuno".

The report found that after talks with Mizuno, HMC did not vote, an outcome helpful to Toshiba.

Some analysts say it remains unclear how METI will apply the new law to foreign investors, and the head of the Tokyo Stock Exchange has called for more detail from Toshiba.

METI may have been happy to leave it to Mizuno to talk to Harvard, said Ulrike Schaede, a University of California professor following Japanese business, but it still remains unclear how open officials want Japan’s economy to become.

“The Toshiba case is bringing to the fore the burning issue on where on this spectrum Japan wants to fall,” Schaede said.

Mizuno declined to comment on his views about the new trade rules. But, he said, he is known as someone who takes “instruction from nobody.”