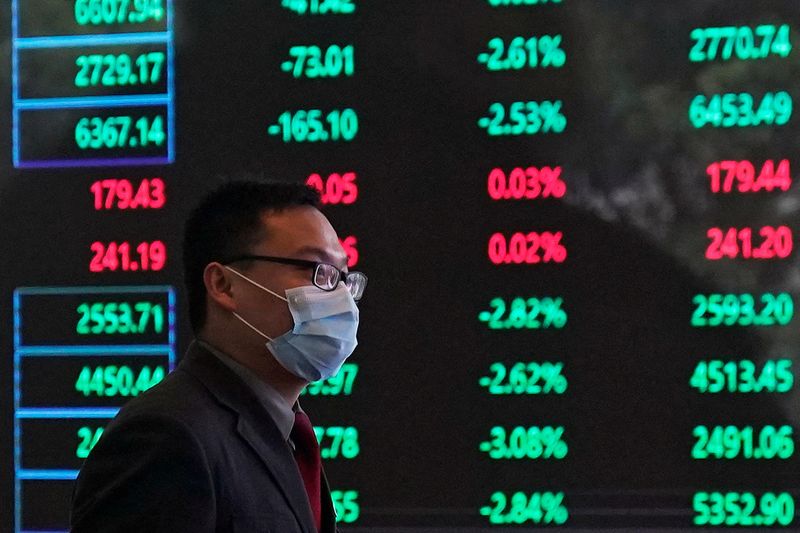 © Reuters. FILE PHOTO: A man wearing a protective mask is seen inside the Shanghai Stock Exchange building, as the country is hit by a new coronavirus outbreak, at the Pudong financial district in Shanghai, China February 28, 2020. REUTERS/Aly Song

SHANGHAI (Reuters) - The Shanghai Stock Exchange (SSE (LON:SSE)) vowed over the weekend to maintain market stability ahead of the politically significant 20th Party Congress later this year, saying it will "resolutely" prevent big and swift swings in capital markets.

The bourse will also help stabilize economic growth by actively supporting control of the coronavirus and the resumption of work, and will manage and shape market expectations toward the positive side, the SSE said in a statement posted on its website on Sunday.

"The SSE should fully understand the huge political significance of the 20th Party Congress, and effectively maintain stability of the capital market," according to the statement, published after the SSE held an internal meeting last week.

Chinese President Xi Jinping is widely expected to secure an unprecedented third term as leader of the Communist Party during the congress later this year, which is held once every five years.

The SSE also said it would make solid and detailed preparations to expand reforms of the initial public offering process, and will shoulder the political responsibility in preventing and resolving financial risks.

The Shanghai Composite Index has rebounded roughly 14% from its low point this year hit on April 27, but is still down about 10% so far this year.