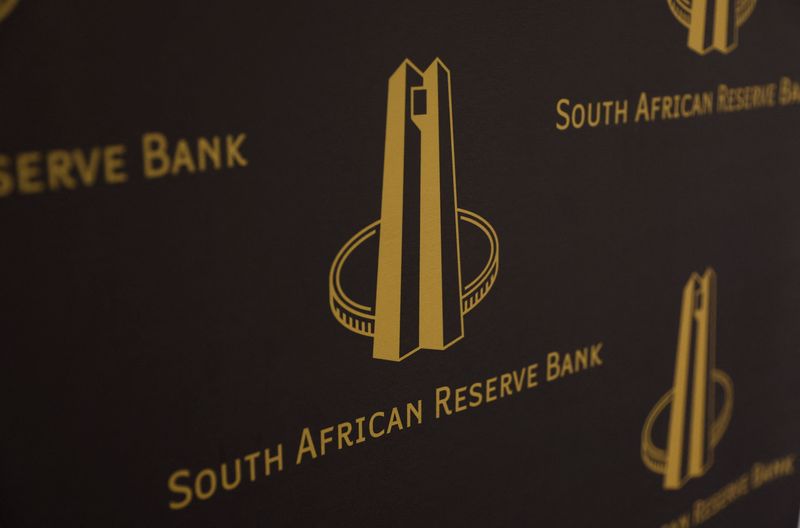 JOHANNESBURG (Reuters) - South Africa's Reserve Bank will hike its repo rate another 75 basis points to 7.00% on Thursday to reinforce its action over sticky and uncomfortably high inflation, a Reuters poll found on Friday.

A majority of economists polled in the last week, 12 of 20, predicted another 75 basis point lift, as the bank did in September. Seven expected a half-point move while one expected a full percent.

"We think another hike of 75bps is on the cards," said Hugo Pienaar, economist at the Bureau for Economic Research.

The SARB was expected to add another 25 basis points in either January or March and pause at 7.25%. It will then ease to 7.00% November. Some economists say SARB may have reached its peak at 7.00%.

"The SARB seems to be firmly in hawkish mode, with a strategy of front-loading interest rate hikes for maximum impact," said Elize Kruger, an independent economist.

Rates could go higher than he has forecast, Pienaar said, citing a weaker rand, suggestions from the Fed that the peak in the U.S. policy rate was likely to be higher than thought previously, and some short-term stickiness in local headline CPI.

South Africa's headline consumer inflation slowed for a second month in a row in September to 7.5% from 7.6% in August, though core inflation rose. It is expected to slow again next week when the statistics agency releases figures for October.

"However, if they (SARB) are forward-looking, as they often like to suggest, they will recognise that inflation has reached an upper turning point, both here and in the U.S., and that the real repo rate will move into positive territory, a more restrictive stance by mid-2023," added Kruger.

The poll suggests South Africa's economy will lose momentum next year to expand 1.2% from an estimated 1.8% this year.

Growth in South Africa's trading partners is also expected to slow next year while commodity prices will likely soften as fears of a global recession increase. Meanwhile, electricity shortages have been a major impediment in Africa's most industrialized economy.

(For other stories from the Reuters global economic poll:)