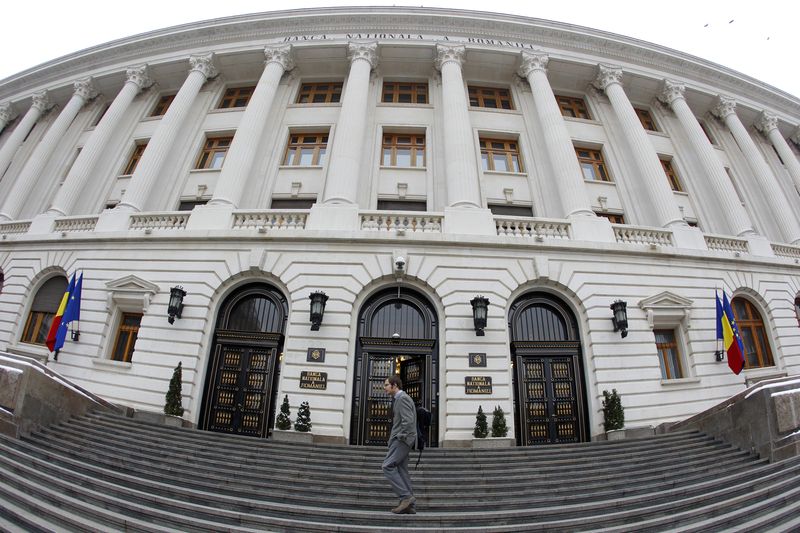 BUCHAREST (Reuters) -Romania's central bank raised interest rates by more than expected on Tuesday and said it expected supply-side shocks amplified by the war in Ukraine to keep inflation into double digits until the second half of 2023.

Policymakers raised the benchmark interest rate by 75 basis points to 3.75%, the sixth consecutive hike since October, but Romanian rates still lag behind those of its central European peers, which have tightened aggressively.

Unlike elsewhere in the region, Romania's central bank must contend with high budget and current account deficits which limit how far it can raise rates.

The bank also relies heavily on using firm money market liquidity controls as a means to tighten policy. On Tuesday, the bank raised its lending facility rate to 4.75% from 4.00% and its deposit rate to 2.75% from 2.00%.

"The updated forecast shows a renewed considerable worsening of the outlook for inflation," the bank said, "as the projected path of its annual dynamics has seen an additional significant upward revision across the entire horizon".

It said inflation, which rose to a 17-year high of 10.15% in March, will accelerate in the second quarter and only gradually decline over the next four quarters.

While inflation will fall to single digits in the second half of 2023, it will remain above the bank's 1.5-3.5% target at the end of the forecast horizon, it said.

Policymakers are expected to release new inflation forecasts for this year and next on May 12. A majority of analysts polled by Reuters had expected a 50 basis points hike, while some saw a bigger 1 percentage point raise.

"We think that the inflation outlook will prompt the NBR to continue to hike rates at its next few meetings to take the policy rate above 5.00% by the end of the year," Capital Economics said in a research note.

"We think it will remain there for a sustained period as the central bank guides inflation back down towards target."

The Romanian leu was flat against the euro, unmoved from levels before the decision.