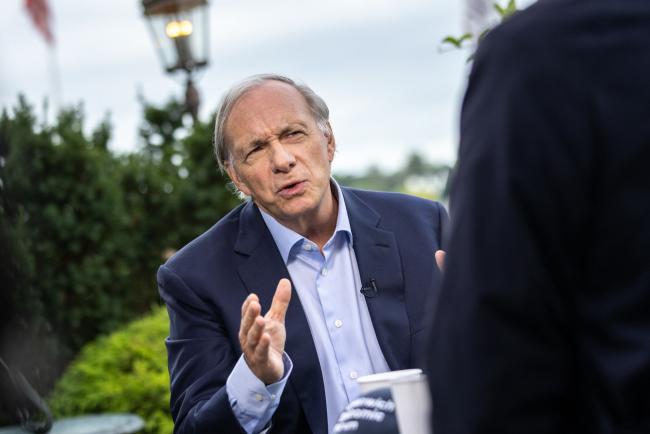 © Bloomberg. Ray Dalio, founder of Bridgewater Associates LP, speaks during a Bloomberg Television interview at the Greenwich Economic Forum (GEF) in Greenwich, Connecticut, U.S., on Tuesday, Sept. 21, 2021. The GEF brings together leaders in global finance, business, media and government for global investment forums to discuss the economic implications of the defining issues of our times.

(Bloomberg) -- Ray Dalio wrote Tuesday on LinkedIn it’s “naive and inconsistent with how the economic machine works” to think the Federal Reserve raising interest rates “will make things good again once it gets inflation under control.”

While tightening leads to less consumer spending, which may reduce inflation, it doesn’t make things better, the billionaire founder of Bridgewater Associates LP said. “It just shifts some of the squeezing of people via inflation to squeezing them via giving them less buying power,” Dalio added.

“There isn’t anything that the Fed can do to fight inflation without creating economic weakness,” Dalio wrote in his conclusion.

“With debt assets and liabilities as high as they are and projected to increase due to the government deficit, and the Fed also selling government debt, it is likely that private credit growth will have to contract, weakening the economy,” Dalio said.

“Over the long run the Fed will most likely chart a middle course that will take the form of stagflation,” he added.

To view the source of this information click here