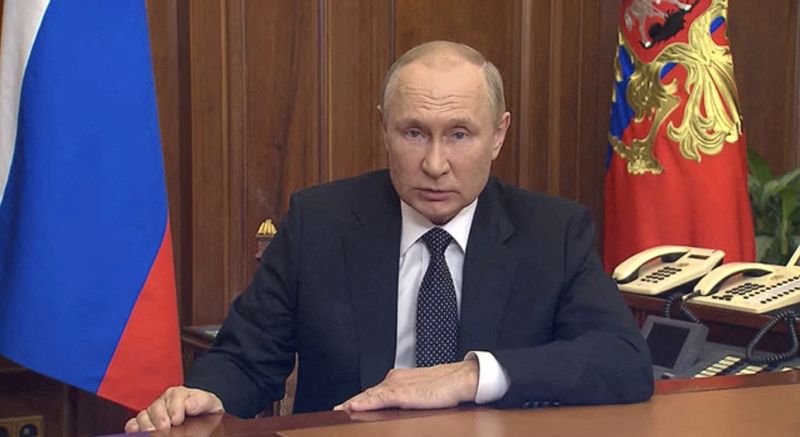 President Vladimir Putin on Wednesday ordered Russia's first mobilisation since World War Two, warning the West that if it continued what he called its "nuclear blackmail", Moscow would respond with the might of all its vast arsenal.

The euro tumbled to a two-week low against the dollar, European stock markets slipped, and investors piled into safe-haven bonds, pushing yields on German and U.S. government debt down.

Europe's STOXX index briefly fell to its lowest since early July, while the euro stocks volatility index jumped to its highest in more than two weeks.

EMERGING MARKETS FX: Hungary's forint, Poland's zloty and the Czech crown weakened around 1% or more against the dollar, and were also softer versus the euro. Russia's rouble slumped to a more than two-month low, heading towards 63 to the dollar.

EMERGING MARKETS EQUITIES: are down more than 1% to flirt with a fresh 28-month low. Russian stocks dived 10% in early trading, but later recouped most of those losses.

“It’s amazing how little we are paying attention to that and to me the fact that this 3-day war turned into 210 days, shows the sort of diminishing returns of shock value we get from what clearly is an escalation. The market’s view of that has only been expressed in a slight bump up in the defence industry stocks. and energy prices. But it is relatively shocking, if this were six months ago, the market would have a much larger reaction but in the here and now and we are 210 days into this now and it feels like Ukraine continues to put up strong resistance with a united NATO support so to the extent that what would otherwise be a very market moving event, markets have moved that to the back burner, even with the threat of using nuclear weapons, which is the most shocking part of the news story.”

“To the extent that we heard some rumblings of this yesterday that may well have been part of yesterday’s drawdown but it’s really hard to know the combination of advance notice of this escalation being priced in yesterday and yet the defence industry stocks and the energy component didn’t make the move until today so it’s hard to rationalize that.”

“It was also equally surprising and unrelated that we got relatively good news yesterday on China easing back on some of their covid restrictions and all that did was show up in casino stocks and nothing else. Frankly, that is one of the largest impediments to supply chains in all sorts of industries and yet the casino stocks were the only sector that applauded that, which just tells you that everything is about the domestic focus and monetary policy. It seems like all markets care about is whether the Fed goes 75 basis points or a full percentage point which again is equally ludicrous because it’s all about where they stop, not the steps along the way.”

“It’s affecting the commodities markets - we’re seeing oil move up.  And the dollar continues to strengthen even further. War news is giving metals and oil a temporary move to the upside.”

“The news is sensational. From a geopolitical standpoint, Putin is frustrated that the war isn’t going his way and he’s threatening the west. It’s not the first time.”

“It’s something that would move the commodities market, but the stock market today is focused on what the Fed will do or say.”

“Why aren’t (stock index futures) reacting negatively? Stock investors are putting this mobilization on the back burner. It could just be a temporary factor.”

“Yields are going down ahead of the Fed announcement. Yields and the dollar are getting boosted, falling into the safety trade.”

“There had been a sense in Europe that Russia would look for a compromise. Today’s announcement makes it clear that is incorrect. Russia is digging in for the long haul. They are prepared to tough it out.”

“Russia is prepared for a winter where there is no Russian energy going west. They have been able to build up strong financial reserves. This year, Russia has made so much money exporting oil and gas. There is enough money in the system … to maintain stability. They will not have an economic crisis.”

“Moscow woke up to … its dependence on Europe. It has done a great deal about that, whereas Europe has done nothing until this year.”

“Russia is much better prepared for this confrontation than Europe is.”

“It indicates that Russia will be less ambitious … for territory than it was.”

“The footprint of war shrinks but becomes more entrenched. There is no point in having peace talks.”

“The next six months are going to be tough. Germany was too reliant on Russian gas – that was clearly a mistake. Now this is being addressed big time. January and February are covered by gas storage. Russia has lost a very important customer and they are not going to get it back.”

“The public sees the cruelty and nihilism of Putin’s Russia and they are not willing to give in to blackmail.”

"I strongly think of his February speech. That was also ignored at first.

"It is not yet a total war for Russia because there is no full mobilization. But I think Putin is underestimated. He has escalated every time. For him it is life and death. I don't see why his next move will be de-escalation unless he wins. Which of course isn't good either. He keeps going.

"It's a bit difficult to see structurally lower yields. The war has led to higher yields."

"The ECB came out saying that the rate hikes are going to be much stronger, but it didn’t seem to impact the German bond yields which have fallen, which is an indication that investors are fleeing into assets that are considered more safe."

"If the market was taking those threats seriously you would see markets crash, and the fact that we haven't seen any such movement shows that the Russian threat for now is being perceived as sort of sabre rattling, because we've heard these threats before.

"It's not perceived to be likely that Russia is about to start a global nuclear war that's going to end civilization. So, I think that's the right response from the markets now.

"If you look at when the Russian-Ukraine crisis started, there were two currencies that fell sharply, the euro and the pound, and that was due to their geographical proximity.

"If it gets really, really bad, I'd expect the dollar to rise."

"The initial implications are clear: it’s a potential escalation which is negative for the outlook in the euro zone, and so it's unsurprising that the euro is weaker. It has boosted risk aversion more broadly, so the dollar is stronger.

"It was interesting to me that dollar/yen dipped on the news of the announcement, potentially indicating a return of the yen’s safe-haven credentials which have been absent for much of the year.

"If the conflict in Ukraine escalates then that’s clearly negative for growth, but it's not clearly disinflationary. An escalation may add to supply chain strains."

"A partial mobilization will affect the Russian economy at a time when it can least afford it, with the government being able to call on businesses and civilians to contribute to the war time effort not just financially but also physically.

"Given the passage of time that the 'special operation' has taken, the partial mobilization will not be taken warmly domestically. Any resulting economic downturn will lead to increased resentment. The mobilization is a sign of Putin's desperation and the effectiveness of Ukraine's recent counter offensive.

"While Putin's move is calculated to help him win the war, it may just hasten his demise and spark a virtuous cycle in the global economy by easing food and energy supply issues that will see inflationary pressures subside."

"It creates an extra layer of uncertainty. In a world with high geopolitical tension, the Russia-Ukraine (war) is still on the radar of many investors. Recently, there are really two major things that investors will be looking at – the first is the Fed, the second is Russia-Ukraine."

"If there is greater movement from Russia, then obviously we would probably see higher pressure in the market like in equities, and money will probably flow back again to safe haven (assets) such as the dollar, which will make it even stronger."

"What it seems to be doing is affecting the dollar. Obviously we have a situation where investors flock to safe havens, and we've also got the anticipation that we are going to see another rate hike from the Federal Reserve today.

"So the dollar was already looking quite punchy and clearly just the proximity to Ukraine of countries in Europe does make people consider what the situation might look like if the war in Ukraine becomes something bigger. So it's a double-edged sword, which is impacting the euro, sterling and the dollar in different ways."

"Everyone has been extremely nervous about the FOMC meeting this week, and we’ve seen very defensive positions. This announcement by Putin to intensify the escalation in Ukraine definitely doesn’t help.

"It is fueling risk-off sentiment and adding to anxious expectations among global investors. We are seeing a flight to safe havens as a result.

"It’s definitely pushing the dollar up. Most of the impact is in Europe - naturally, given the proximity to the conflict - so a lot of depreciatory pressure (is) on the euro and also the pound, but also in Asia on the yen and the RMB (Chinese yuan), so across the board we are seeing the FX market react to this.

"I would anticipate this is not positive news for other risk classes like equities."

"The escalation of the situation in Ukraine is definitely affecting the risk appetite, and bond yields are falling this morning because of this.

"It definitely has an impact on the bond market, especially because we've seen an extended stretch of increasing central bank rate hike expectations. It might be time for a breather and this geopolitical tension adds to the correction potential, at least temporarily, for lower yields."

"It’s the fact that he’s decided to dust off the nuclear card that obviously hasn’t gone down well, and the euro has really been feeling the effects of that as well. I think there is a perception that he’s really upped the ante, and how does the West respond to it?

"I think he’s realised he’s in trouble and he’s doing the only thing he knows how to do, and that is up the ante and find out if the appetite is there amongst NATO leaders and EU leaders to call him and, to be honest, with the stakes being as high as they are, they’ve got no choice."