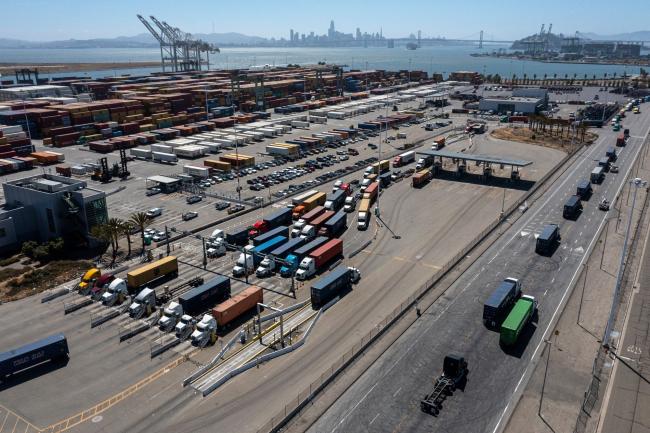 © Bloomberg. The Port of Oakland in Oakland, California, US, on Thursday, July 14, 2022. Truckers servicing some of the US's busiest ports are staging protests as state-level labor rules that change their employment status begin to go into effect, creating another choke point in stressed US supply chains.

(Bloomberg) -- Fresh economic data Wednesday reduced the odds that the US will report two straight quarters of a contracting economy and avert what is commonly regarded as a recession in much of the world.

Economists expect gross domestic product grew an annualized 0.4% in the April to June period, according to the median in a Bloomberg survey. The economy contracted 1.6% in the first quarter and several had predicted another negative print, which would fit the definition of a technical recession.

The US merchandise trade deficit narrowed for a third month in June, reflecting both an increase in exports and a drop in imports, according to data from the Commerce Department on Wednesday. The report also showed firm advances in inventories at retailers and wholesalers.

A separate report showed bookings for durable goods -- items meant to last at least three years -- increased 1.9% in June after a 0.8% advance a month earlier. Core capital-goods shipments, a figure that is used to help calculate equipment investment in the government’s gross domestic product report, increased 0.7% in June after a 1% surge a month earlier. The figures, however, aren’t adjusted for inflation.

“Stronger data today in the advance goods trade report and wholesale inventories lifted our tracking from 0.1% to 1.0%, lowering the risk of 2Q data marking a technical recession,” Morgan Stanley economists said in a note.

Bloomberg Economics also revised its second-quarter GDP forecast from a slight negative to a small positive print due to better-than-expected net trade and inventories data in June.

“Still, after the first quarter’s decline, flagging momentum leaves the economy vulnerable to further adverse shocks such as a potential energy crisis in Europe or intensified supply strains in the second half of the year,” Bloomberg economists Eliza Winger and Yelena Shulyatyeva said in a note. “The risk that the US will slide into a downturn later this year has risen.”