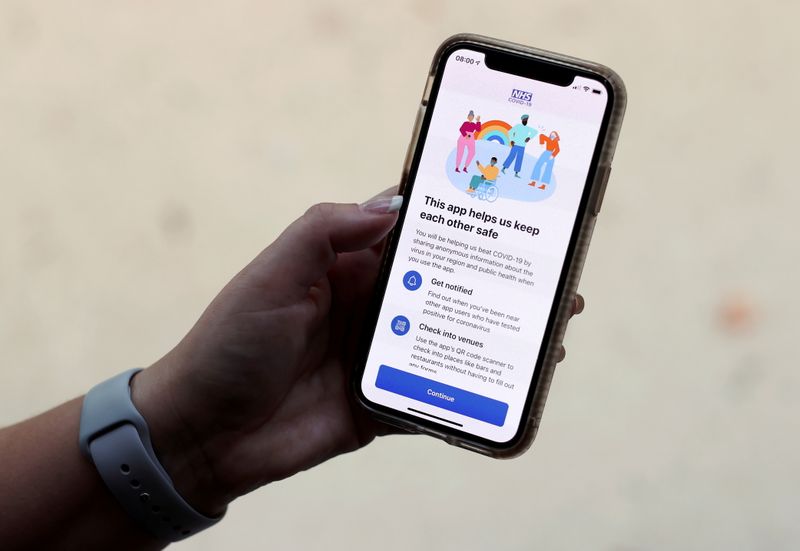 By James Davey and Kate Holton

LONDON (Reuters) -England's car plants, railways, supermarkets and pubs warned the government on Monday that a COVID-19 tracing app, which has told hundreds of thousands of workers to isolate, was wrecking the recovery and pushing supply chains to the brink of collapse.

Alerts, or "pings", sent out by the official app telling anyone identified as a contact of someone with the disease to self-isolate for 10 days have caused huge disruption in schools, businesses and the healthcare system.

The crisis, which comes just as the government lifts nearly all restrictions in England to help drive an economic recovery, has been dubbed the "Pingdemic".

Under pressure, the government said later on Monday it would allow workers in critical roles, such as air traffic controllers and train signallers, to carry on working despite being "pinged" if they were fully vaccinated.

Carmaker Stellantis said its Vauxhall van factory in Luton would move from three shifts to two shifts for the duration of this week, and Nissan (OTC:NSANY) adjusted production in some areas of its Sunderland plant to counter lower staffing numbers.

Britain's biggest rail operator, Govia Thameslink, said it may need to cancel some services in London and South East England. Retailer Marks & Spencer (OTC:MAKSY) said it may have to reduce business hours.

"Where the industry will see the pain is in the supply chain, because logistics runs tight anyway to be efficient," Marks & Spencer CEO Steve Rowe said in a statement.

Pub operator Greene King said it had to temporarily close 33 pubs last week due to a lack of staff. British baker Warburtons said it was struggling to maintain local deliveries as more staff self-isolate, exacerbating a national driver shortage.

The crisis has overshadowed Johnson's "freedom day" on Monday, which ended more than a year of lockdown restrictions in England.

A person familiar with the situation in the retail sector said just under 10% of staff were absent, although some retailers were seeing absence rates of around 30%.

A second source at one of Britain's biggest supermarkets, who spoke on the condition of anonymity, said while absence rates were up, they remained manageable and below the peaks of last year when the pandemic was raging.

Some healthcare workers may be able to skip isolation and those who have been fully vaccinated will be exempt from isolation demands from Aug. 16.

Smaller businesses, however, are particularly alarmed.

"Having just one of my customers test positive will close my entire business for two weeks with no financial support," said Helen Williams, owner of Willow Bridal Boutique in north west England.