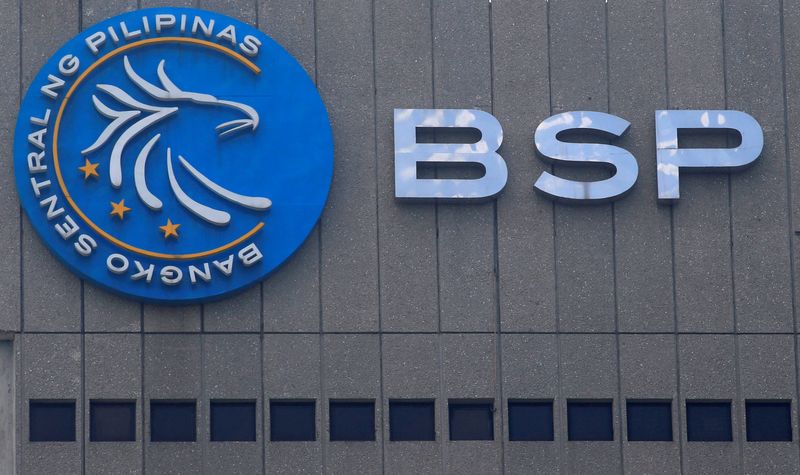 MANILA (Reuters) - The Philippine central bank hiked its benchmark interest rates by half a percentage point on Thursday, and said it was ready to take further action as it raised its inflation forecasts for this year and next, and as the peso sank to a record low.

The Bangko Sentral ng Pilipinas (BSP) raised the overnight reverse repurchase facility rate to 4.25%, as predicted by most economists in a Reuters poll. It was the fifth rate hike this year, bringing the total increase to 225 basis points (bps).

The interest rates on the overnight deposit and lending facilities were hiked to 3.75% and 4.75%, respectively.

The BSP said it was ready to make adjustments as the situation evolves and said inflation would breach its target range for this year and next. It said it had no contemplated off-cycle meetings ahead.

"The monetary board noted that price pressures continue to broaden. The rise in core inflation indicates emerging demand-side pressures on inflation," the BSP said in a statement.

"Given elevated uncertainty and the predominance of upside risks to the inflation environment, the monetary board recognised the need for follow-through action to anchor inflation expectations and prevent price pressures from becoming further entrenched."

The BSP is likely to raise rates by another 75 bps this year, said Gareth Leather, senior Asia economist at Capital Economics.

"But we think the tightening cycle will come to a finish before the end of 2022," he said, while noting most other analysts expect the BSP to continue tightening policy in 2023.

Earlier on Thursday, the Philippine peso sank to a record low against the surging U.S. dollar, taking its losses to more than 12% this year, the worst performer among currencies of Southeast Asia's five major economies. It was largely unchanged after the BSP announcement.

The BSP said Thursday's adjustment would help alleviate pressure on the peso, and said it stood ready to participate in the forex market to reduce volatility but had no intention of targeting a particular exchange rate level.

The BSP raised its average inflation forecast to 5.6% from 5.4% for 2022, still above the full-year target range of 2% to 4%, and said it expected to see inflation start to decelerate by the fourth quarter of this year.