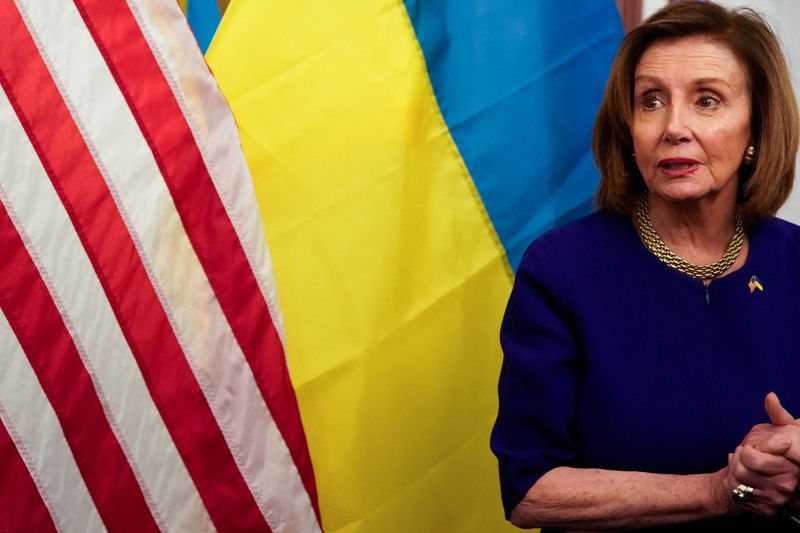 © Reuters. U.S. House Speaker Nancy Pelosi (D-CA) speaks at an unveiling of a photo exhibit on the Russian invasion of Ukraine, at the Capitol Hill in Washington, U.S., April 28, 2022. REUTERS/Elizabeth Frantz

Biden asked Congress on Thursday for $33 billion to support the government in Kyiv - a dramatic escalation of U.S. funding for the war with Russia more than two months after it invaded Ukraine.

Lawmakers from both parties said they wanted to approve the emergency funding request quickly, but there was no immediate word on exactly when the House of Representatives and Senate might vote amid disputes over what should be in any legislation.

"We hope to as soon as possible pass that legislation," Pelosi told her weekly news conference.

Democrats, who narrowly control Congress, and Republicans disagree over whether to combine the Ukraine funding with billions of dollars for COVID-19 relief that Biden requested in March.

Some Republicans have said they want the two issues to be separate, but some Democrats have seen support for Ukraine aid as a chance to pass COVID relief.

Pelosi said lawmakers would have to "come to terms" with how to address both issues.

Some Republicans have also threatened to tie Biden's funding requests to legislation that would prevent him rescinding "Title 42", an immigration rule imposed under Republican president Donald Trump that allowed U.S. officials to turn asylum seekers away from the U.S. border with Mexico due to the COVID pandemic.