Pakistan's annual inflation rises to 14-year high at 24.9% in July 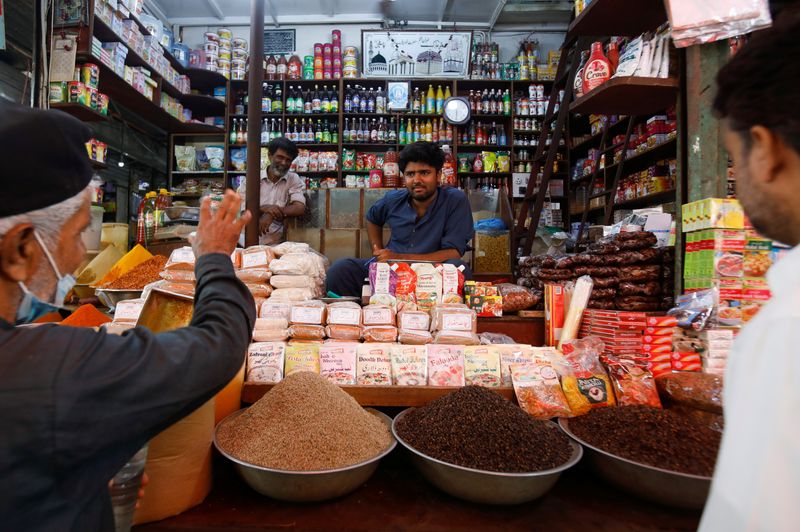 © Reuters. FILE PHOTO: A shopkeeper listens to a customer as he sells groceries at a shop in a market in Karachi, Pakistan June 10, 2022. REUTERS/Akhtar Soomro

ISLAMABAD (Reuters) - Pakistan's annual consumer price inflation reached 24.9% in July, up from 21.3% in June and the highest in 14 years, the statistics bureau said on Monday.

Non-food items, mainly fuel and electricity charges, were the major reason for the rise, it said, adding surging prices for vegetables, pulses, cooking oil, wheat flour and milk were also a significant factor.

On a month-on-month basis, inflation jumped by 4.3% in July, the bureau said.

Pakistan is in economic turmoil with fast depleting foreign reserves, an historic depreciation of the rupee against U.S. dollar, and soaring inflation.

However, sufficient measures have been put in place to contain the current account deficit as energy imports have declined and non-energy imports showed moderate falls, the central bank and finance ministry said in a joint statement.

It was issued on Sunday night, hours after the ministry announced that the country's imports had fallen one third in the month of July.

The significant cut in imports - both in oil and non-oil payments - will remove pressure on the rupee, which had depreciated over 25% this year against the U.S. dollar, Finance Minister Miftah Ismail said on Sunday.

The rupee slightly recovered on Monday with a 53 paisa appreciation.

"Macroeconomic policies - both fiscal policy and monetary policy - have been appropriately tightened to reduce demand-led pressures and rein in the current account deficit," the joint statement said.

It added that the government was ready to implement all conditions agreed with International Monetary Fund to be able to receive its next tranche if approved by its board, which is likely to meet later this month.

The IMF reached a staff-level agreement with Pakistan last month for the disbursement of a $1.2 billion tranche, which will unlock other external financing avenues.