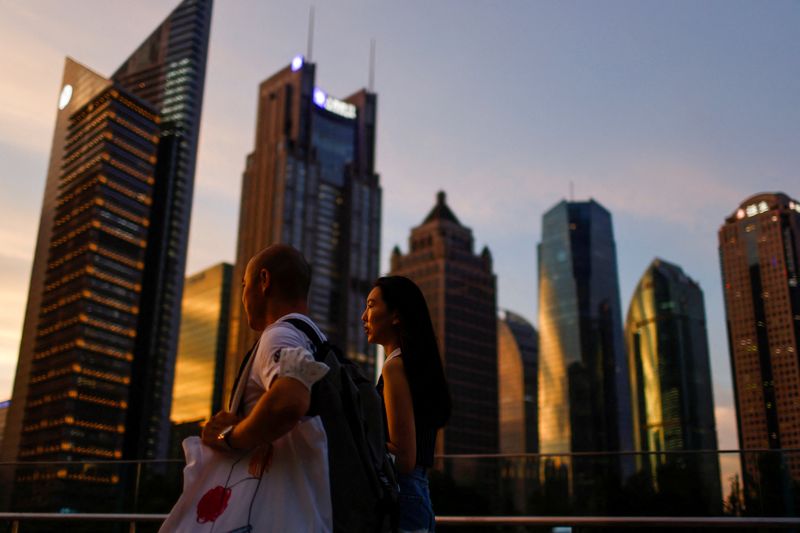 By Selena Li and Anshuman Daga

HONG KONG/SINGAPORE (Reuters) - Wealth managers at the big global banks are tempering their expectations for Asia, their fastest growing market, after China's regulatory crackdown and COVID-driven slowdown helped to push clients to the sidelines, bankers and analysts said.

Some wealth managers have cut the credit they extend to rich clients, they said, while many clients have moved their money elsewhere or put it in cash as they assess the changes in China, as well as the Ukraine conflict and other global uncertainties.

The slowdown in wealth business was evident this past week in earnings results from Credit Suisse (SIX:CSGN), HSBC, Standard Chartered (OTC:SCBFF) and UBS, which have relied on Asia to drive up revenues.

"We just have to bear this for a few quarters, there's no shying away from it," said a Singapore-based banker with an Asia-focused private bank.

The banker and his peers declined to be named as they were not authorised by their organisations to speak to the media.

Bankers stressed, however, that while the mood has changed in Asia at least for the next few quarters, the global wealth managers still saw Asia as their best growth opportunity.

"What we see is actually a similar sentiment with clients (in Asia) from last quarter. So muted appetite to invest, a bit of a wait-and-see pattern in terms of active investments," UBS CEO Ralph Hamers said on a first-quarter earnings call.

A key shift in the investment calculus for China came from last year's regulatory crackdown targeting industries such as internet platforms, property development and private education that have created many of China's billionaires. Authorities aim to address the widening gap between rich and poor through what President Xi Jinping has branded a "common prosperity" policy.

That cast deep doubts over the growth prospects for heavyweight players in those industries, including Tencent and Alibaba (NYSE:BABA), and triggered a massive sell-off in their stocks.

That, in turn, clouded wealth management prospects in the region, bankers said, although on Friday Beijing signalled a potential easing of the clampdown with plans for top leaders to meet tech executives early next month.

"Our clients started to realise since the second half that they would need to diversify their portfolio to protect their wealth against the fallout of the policy," said a Hong Kong-based wealth manager at a U.S. firm.

"But no one knows now which sector is going to generate the new rich, or see a regulatory crackdown, and whether the total wealth pool maintains its growth as before. So in that sense, we do see enlarged long-term uncertainties."

"The era during which China's internet industry kept pumping high net worth clients has come to its end."

UBS said in a report in February that the revenue pool for private banking service providers in China is foreseen within a wide range between 224 billion yuan and 1.03 trillion yuan yuan ($34-156 billion) in 2030, as the common prosperity drive could bring more uncertainties to entrepreneurship.

The rising uncertainty and sharp market downturns in recent months have also triggered margin calls on money that wealth managers loaned to clients to buy stocks and other assets.

This has reduced lending by private banks, which is key to increasing their assets and locking in clients.

The worsening economic outlook due to prolonged COVID-19 outbreaks in China's big cities and a looming rise in interest rates globally have also spurred some wealth managers and their clients to deleverage, as they lose their appetite for trading.

"We hear from the banks clients tend to be very conservative with trades and less likely to commit anything more structured, and are really keeping themselves pretty light," Jasper Yip, Hong Kong-based Partner at consultancy Oliver Wyman, said.

Two wealth managers with large European private banks said their clients' cash holdings, as a percentage of their total portfolio, had risen to 20%-25% in Asia compared with 5%-10% at the same time last year.

Their banks may be forced to look at a way to cut costs if the revenue slide continues in the coming quarters, they added.