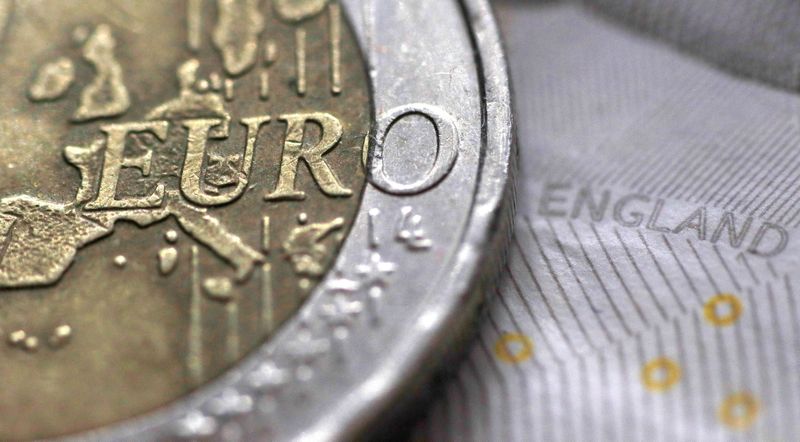 © Reuters. FILE PHOTO: A two Euro coin is pictured next to an English ten Pound note in an illustration taken March 16, 2016. REUTERS/Phil Noble/Illustration

(Reuters) -Germany will not need to invest its central bank cash deposits in new ways for now after the European Central Bank decided to pay interest on them, a finance agency spokesperson told Reuters on Friday.

The news offers relief to markets concerned that such a change in response to Thursday's interest rate hike, the ECB's biggest ever, would have worsened a shortage of already scarce safe euro zone assets.

The ECB said on Thursday it would pay interest on governments' cash deposits until April 30 2023, temporarily removing a 0% cap after the hike.

That has helped address fears that the cap would have encouraged governments to cut some of their cash balances at their central banks, worth some 600 billion euros ($598 billion), according to ING Bank, to deploy on the markets for more attractive rates.

Had the cap remained in place, euro zone debt offices would likely have taken out more collateral, in the form of high quality debt, from markets, to deploy the cash elsewhere, exacerbating a bond shortage caused by years of ECB asset-buying.

As expectations of a further squeeze on top-rated German debt eased, two-year yields shot up to 11-year highs on Thursday.

The supply of German debt, the euro area's safe asset, has been a particular concern for investors. An even deeper shortage could have depressed overnight rates, hindering the transmission of ECB rate hikes into the financial system and the broader economy at a time of record-high inflation.

"As it remains possible for us to deposit liquidity with the central bank at market conditions, as of today we don't have to make use of alternative investment options," the finance agency spokesperson told Reuters.

She confirmed Germany would maintain its present strategy until the ECB's removal of the cap expires in April 2023. That follows a similar decision by the Netherlands on Thursday.

Still, analysts warned that the ECB's decision does not address the shortage of bonds markets already faced prior to the rate hike, and being temporary, only delays an adjustment money markets will need after years of negative interest rates.

"How our cash balance will look like from (May 2023) onwards remains to be seen. If still positive we would use alternatives to the deposit at the Bundesbank," the German spokesperson said, referring to Germany's central bank.

One way debt offices could deploy the cash is to lend it against government bonds through repurchase agreements. The finance agency has used such "reverse repos" when required and "economical", the spokesperson said.

Investors worry that it would worsen bond shortages, especially as Germany had stepped up lending of its debt to investors this year in the repo market to address the shortage.

Some are already plotting changes ahead.

Austria's Treasury said on Friday that although a change in its cash strategy was not imminent, it aimed to decide and apply a new one "well before" April 2023.

It was studying plans including lending securities in return for other securities, rather than cash.