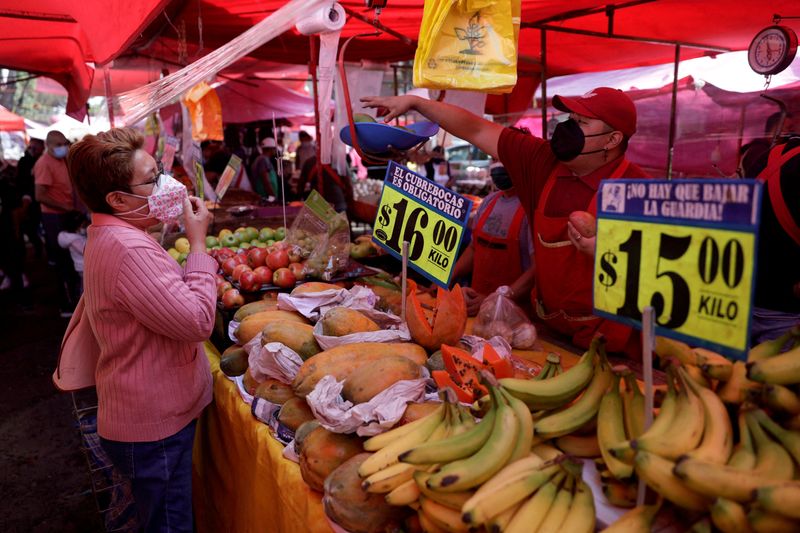 © Reuters. FILE PHOTO: A vendor chats with a customer at a stall in an outdoor market in Mexico City, Mexico January 23, 2022. REUTERS/Luis Cortes/File Photo

MEXICO CITY (Reuters) - Subsidies from the Mexican government to combat rising inflation in the country have cost some 575 billion pesos ($28.04 billion) this year, officials said on Tuesday, adding that these have helped ease the pain of ordinary people.

Another 73 billion pesos went toward domestic energy subsidies, which the government increased after the war in Ukraine drove up prices on the world market.

The officials said some 69 billion pesos went to "food security," partially due to a May plan to boost production of basic foodstuffs such as corn, rice and beans, and maintain prices on goods such as white bread.

Despite the measures, inflation has reached 8.16% in the first half of July, official numbers showed.

It has fueled speculation the country's central bank, known as Banxico, will again hike interest rates. Analysts forecast that inflation will reach 9.5% by the end of the year.

But officials on Tuesday argued that inflation would have been 2.6 percentage points higher without the measures.

"That is why, among other reasons, inflation in Mexico is lower than what it is in other countries," said Finance Minister Rogelio Ramirez de la O, calling the results "good."

Ramirez de la O reiterated that the government would not let energy prices rise, and would work to increase imports of basic goods while limiting white corn exports.

Mexico will also continue talks with the United States to purchase milk and fertilizer, he added.