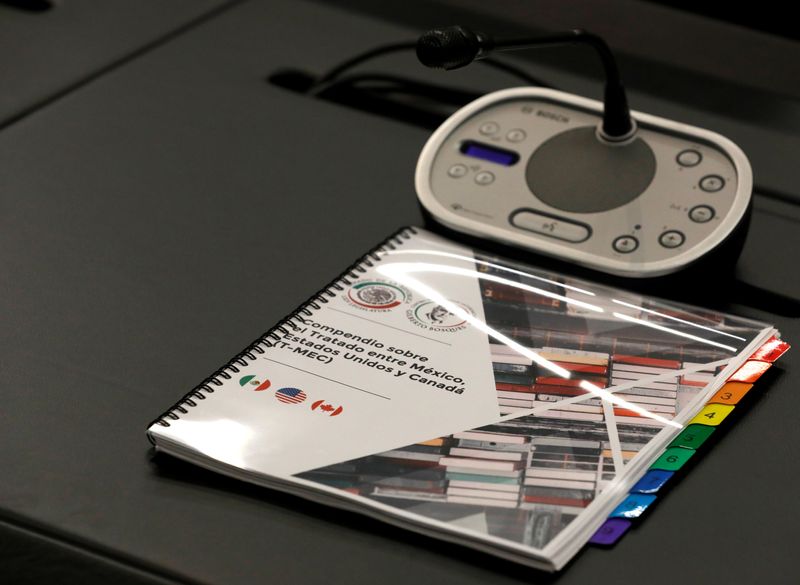 © Reuters. FILE PHOTO: A compendium of the United States-Mexico-Canada Agreement (USMCA) deal is seen at the Senate building in Mexico City, Mexico May 30, 2019. REUTERS/Carlos Jasso

MEXICO CITY (Reuters) - A Mexican union on Tuesday said it will request a U.S. labor complaint over alleged worker rights violations at a BBB Industries auto-parts plant in northern Mexico, the latest effort to leverage the terms of a regional trade deal.

U.S. labor authorities have filed five complaints since last year - all in the autos sector - irritating parts of the Mexican government which has complained that the mechanism is being applied before states have time to implement workplace reforms.

Under the 2020 United States-Mexico-Canada Agreement (USMCA), which has tougher worker rights rules than its 1994 predecessor free-trade agreement, activists have increasingly flagged alleged misconduct around union representation amid demands for higher wages after years of stagnate pay.

In a petition to U.S. labor officials, Mexican union SNITIS said workers were intimidated and threatened among other irregularities during a contract vote by union members last month at BBB Industries in the border city of Reynosa.

BBB, a privately held Alabama-based company which refurbishes car parts, did not immediately reply to a request for comment.

Such contract votes by union members are required under a labor reform that underpins the USMCA, and are geared at wiping out the once widespread practice of deals struck between companies and business-friendly unions behind workers' backs.

The petition noted various procedural flaws: The vote tally exceeded the number of workers; the ballots were not numbered; neutral observers were absent; workers were not given copies of their contract until voting day.

Workers also alleged that company representatives inside the plant and on the production lines pressured them to vote in favor of the contract at risk of losing their benefits, the type of intimidation tactic long prevalent in Mexican workplaces.

CTM, a powerful union that holds the BBB contract and many more across Mexico's autos sector, did not immediately reply to a request for comment.