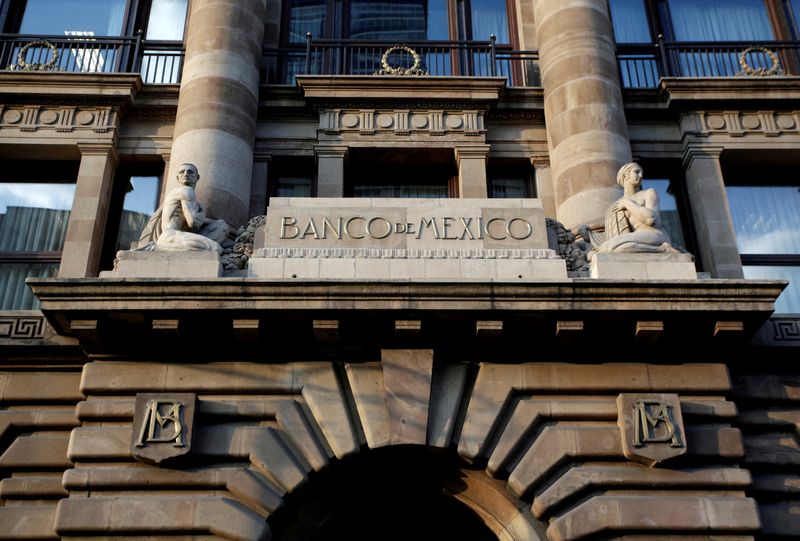 MEXICO CITY (Reuters) - Mexico's central bank signaled concern over rising inflation and labor costs as its board voted last month to raise its benchmark interest rate by 50 basis points to 5.50%, minutes from the latest monetary policy meeting showed on Thursday.

"All members mentioned that headline and core inflation expectations for 2021, 2022 and for the next 12 months increased again, along with medium-term expectations, while long-term expectations have remained stable at levels above the target," the Bank of Mexico said in the latest minutes https://www.banxico.org.mx/canales/%7B8F34053D-82F0-A7C5-1BDB-87807D8A6906%7D.pdf.

"Most members pointed out that expectations corresponding to the end of 2022 are already above the upper limit of the target range," said the bank, which is also known as Banxico.

Outpacing market expectations, four of Banxico's five board members on Dec. 16 opted for a 50-point hike, and one for a 25-point increase. As of January, a new governor, Victoria Rodriguez, has taken the helm at Banxico.

Mexican inflation averaged 7.37% in November, the highest rate in over 20 years, and more than double the central bank's target. Banxico aims for inflation of 3%, with a tolerance range of one percentage point above and below that level.

Mexico's government said last month it had agreed with business groups to raise the minimum wage by 22% this year in a bid to continue trying to narrow the country's huge wealth disparity. The minimum wage remains at a tiny fraction of U.S. levels.

The minutes stated that "most members noted that the recent increase in the minimum wage could exert pressures on labor costs," adding to factors the bank must weigh.

The minutes also showed that all the board members noted that forecasts for headline and core inflation were revised upwards, especially for 2022, although a majority of them mentioned they should decrease to a larger extent after a year.