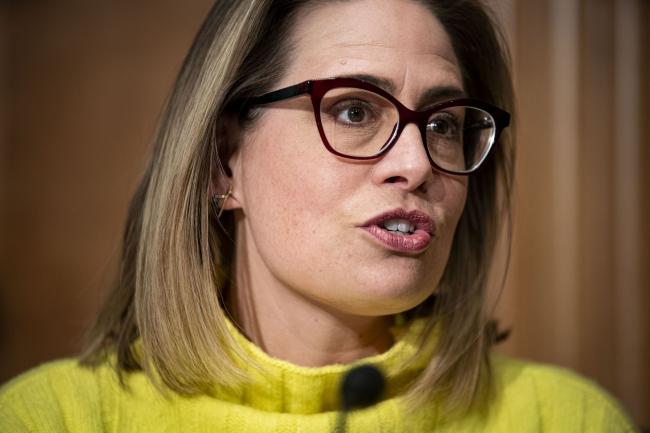 (Bloomberg) -- Now that Senator Joe Manchin is on board with a $433 billion tax and climate bill, Democrats, Republicans and the private equity industry all are trying to suss out where Senator Kyrsten Sinema stands.

The Arizona Democrat was left out of the negotiations between Manchin and Senate Majority Leader Chuck Schumer, which resulted in legislation that, among other things, would eliminate a tax break for fund managers known as carried interest.

Sinema, whose attention-grabbing style in the staid Senate belies her tight-lipped negotiating tactics, has given no clue about whether she might provide the 50th vote needed to pass the legislation in the Senate. The 46-year-old brushed off questions last week before the Senate left Washington for the weekend and her staff gave no signal that anything had changed.

“Senator Sinema does not have comment,” her spokesperson, Hannah Hurley, said Monday. “She’s reviewing the bill text and will need to see what comes out of the parliamentarian process.”

In the evenly divided Senate, Democrats need all 50 members of their caucus to pass the legislation if all Republicans are present and voting “no.” Manchin had been the other holdout blocking more ambitious Democratic initiatives. But with his role in pulling together this latest bill, Sinema becomes the the pivotal vote.

Manchin told reporters Monday he hoped to speak to Sinema when she arrived in Washington later in the day.

“Kyrsten is a good friend of mine,” he said.

Sinema was the key architect of the final drug provisions in the bill, signing off on them after eliminating a proposed 95% tax on pharmaceutical companies that do not cut prices for those with private insurance.

Sinema has a long history of throwing up roadblocks to plans backed by more liberal Democrats. She opposed increasing the minimum wage in the March 2021 Covid relief bill, opposes ending the filibuster to pass voting rights and abortion legislation and fought attempts to hold up the bipartisan infrastructure bill she negotiated last year until a $3.5 trillion social spending bill proposed by progressive was passed. That larger bill later died when Manchin came out against it.

She is the main reason the smaller Inflation Reduction Act proposal now on the table doesn’t reverse the Trump-era corporate and individual rate cuts. But it does impose a minimum tax on corporations and eliminates the carried interest break, which has led to heavy pressure from Republicans and industry.

“I’m not speculating about what she is going to do, but I do know there are some provisions in this field that she has had reservations in the past,” Pennsylvania Republican Senator Pat Toomey said Monday on Bloomberg Television. He called Sinema’s silence on the bill “conspicuous” and said he was “looking forward to chatting with her this week.”

Big private equity firms have been encouraging lobbyists to keep fighting through the week to strike any language that suggests carried interest should be taxed at a higher rate.

Private equity’s allies in trade association and lobbying circles have been in contact with the Arizona Chamber of Commerce and Industry as well as other pro-Arizona business interests to encourage them to amplify the message to Sinema’s staff that the bill hurts business, people familiar with the matter said.

Calls from the buyout industry’s allies and lobbyists to Sinema’s tax and legislative staff have been continuing through the weekend, a person said.

Sinema isn’t expected to oppose all tax changes. But in the past she’s indicated that she doesn’t support eliminating the carried interest break. That tax perk allows private equity and hedge fund managers to pay lower capital gains tax rates, which top out at 23.8%, rather than the 37% income tax rate on a portion of their earnings. The senator hasn’t publicly explained the reasoning for her stance on carried interest.

“She will likely make a decision on carried interest on her terms and not political pressures from the party,” said James Maloney, managing partner at Tiger Hill Partners, which advises investment firms on government policies and does lobbying. “Self-determination is the one consistency to her seemingly unique style of decision making.”

Eliminating carried interest is a relatively small change dollar-wise in the context of the $739 billion in tax provisions in the bill. It would only raise about $14 billion additional tax dollars over the course of the decade. If Sinema were to object to repealing carried interest, it could be stripped from the bill without large consequences on other spending priorities, but it could be politically difficult for other Democrats to hand a win to hedge funds and private equity firms.