Made in Britain: Broken supply lines drive manufacturing back home 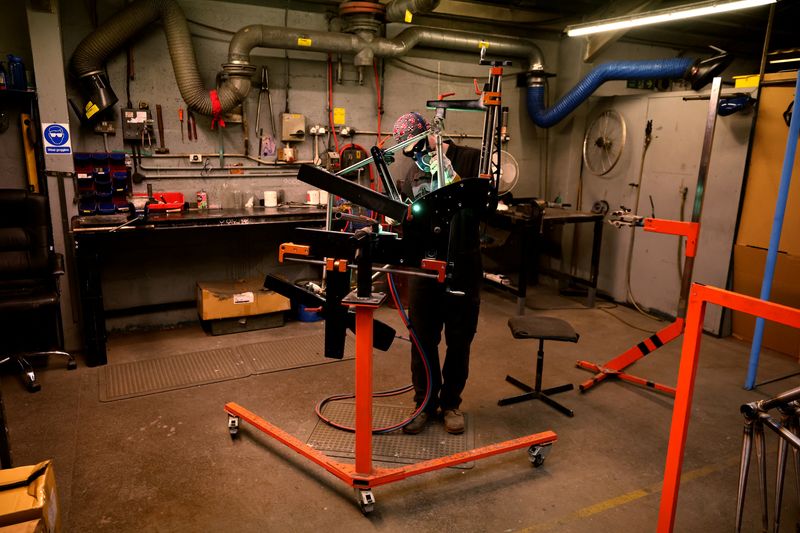 BIRMINGHAM, England (Reuters) - In central England, birthplace of the industrial revolution, factories are buzzing anew, hammering out parts for cars, planes and medical machines that used to be made in Asia.

After two years of global supply-chain disruption, and with dark clouds on the horizon, manufacturers around Britain's second city of Birmingham say they are inundated with orders, helped by new and old domestic clients bringing some production back home.

For decades, supplier decisions were based largely on price. But the pandemic and mounting geopolitical tensions have undermined the mass outsourcing model, prompting some buyers to build alternative production lines nearer to home, despite it being a lengthy process that can drive costs higher.

In Britain, this "reshoring" trend is also being driven by the introduction of full border checks following the country's exit from the European Union.

"It takes a bit of a seismic shock to make companies re-evaluate strategy," manufacturing boss Tony Hague said. "But price becomes fairly irrelevant if you can't get the stuff."

In the last two years, his PP Control & Automation, located just north of Birmingham, has won more than 2 million pounds' ($2.4 million) worth of work that had previously been handled outside Britain, and its order book is up 25% in that time.

A survey by industry group Make UK of 132 companies, conducted just before Russia's invasion of Ukraine, showed that over two-fifths had increased their British supply base, with almost a fifth describing it as a "significant re-routing".

This shift could prove significant in Britain, where the collapse of heavy manufacturing from the late 1970s onwards eroded many skills among the workforce, a gap that's starting to be filled by robotics, automation and 3D printing.

Such reshoring and nearshoring, or bringing production to countries closer to home, is being replicated around the world - though without the complexities of Brexit - in a burgeoning trend that could impact local jobs and economies, as well as the environment.

A survey of more than 1,500 global supply chain leaders by AI group Interos, in the first quarter of 2022, found that more than half said they planned to bring suppliers closer to their operations.

Freight giant XPO Logistics (NYSE:XPO) told Reuters it was also seeing clients in textiles and automotive move some production from Asia to Morocco, and to Eastern Europe.

Nonetheless, while orders may be flowing into British factories, many manufacturers face their own supply-chain disruptions of varying degrees in their procurement of raw materials and parts from abroad, slowing their production.

There are perils involved in the costly and time-consuming process of investing in new machinery, finding new suppliers for materials and building out logistics chains, all with a potential recession on the horizon.

In an effort to mitigate some of these risks, and protect against a reversal of fortunes should the global disruption subside, some British manufacturers are locking clients into multi-year contracts to justify hiring and investment costs.

NO PARTS? NO CARS

Rowan Crozier at precision-stamping group Brandauer in Birmingham said new customers wanted to de-risk operations. With his order books for tools having doubled over the past two years, he has opened a second site and is getting his biggest clients to agree to five-year to six-year contracts.

While in previous years he could not compete with Chinese factories that could churn out products at speed, he says investment in automation, robotics and staff training has changed the dynamic.

He says he can now manufacture a high precision progression stamping tool - used to produce electrical connectors which go into printed circuit boards - in-house for around 5-15% above the prices of quality Chinese toolmakers. Six years ago the price gap was nearer to 30-50%.

Ten miles away, Tony Sartorius' Alucast is also receiving calls from customers who moved their production to India, China and Korea in the early 2000s, asking if he can help. He too insists on long-term contracts.

"From the back end of the 90s and up until fairly recently, price has been the driving force," he said. "But if you don't get your parts, you don't make your cars, and that's damaging."

There are certain companies that have always sought to keep their manufacturing in Britain, typically makers of premium and niche products.

Pashley Cycles, which produces classic English bicycles that can cost about 1,000 pounds, as well as cargo delivery bikes and cycles for city share schemes such as in London, was less affected than others during the pandemic as it sourced and manufactured so many of its products at home.

Pashley's Managing Director Adrian Williams said he was met with bemusement in years gone by when he tried to buy parts from local factories, which would ask why he was coming to them and didn't just buy abroad like everyone else.

Now, he adds, there is increasing collaboration in the region.

Pashley and several Birmingham factories work with non-profit organisations such as WMG, an academic department of the University of Warwick, and the Silverstone Technology Cluster, which promotes advanced engineering.

Mark Godfrey-Vallance, principal engineer at WMG, which links suppliers with customers and promotes innovation, said the creation of new supply chains to build products like electric vehicles was also driving a spirit of collaboration.

"The opportunities are there and if we don't grab them in the UK, I can guarantee that people elsewhere will," he said.

John Glen at the Chartered Institute of Procurement & Supply, a global industry body, said European manufacturers had a window to prove they could compete with lower-cost rivals in Asia while the global movement of goods remained fractured.

But, as a worldwide economic storm brews, and the prospect remains that supply chains could recover, manufacturers in Britain could be burnt if they don't secure long-term contracts.

For now, though, the mood remains buoyant.

UK order books surged between November last year and May this year, before easing slightly in June and July, according to data from the Confederation of British Industry.

Although the reshoring of some production is unlikely to increase manufacturing's input to the British economy from its current 10%, it could boost productivity in a country that has badly lagged on that front since the financial crash of 2007-09.

As Hague of PP Control & Automation walked around the busy floor of his factory, which employs 230 people, he said higher labour costs in Britain did not preclude staying competitive. Wages are only one component of the overall cost of a product, with other factors including materials and energy, he added.

"If you invest in your people, invest in training, invest in automation, invest in robotics, do all the right things, basically as a UK manufacturer, you can be competitive," he said.