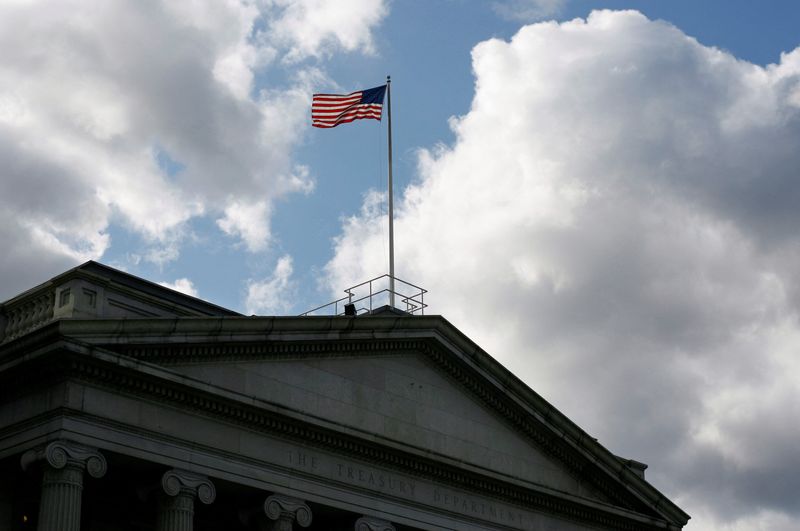 (Reuters) - The U.S. Treasury Department is likely to announce that it will continue to cut some of its issuance of coupon-bearing Treasury debt when it announces its funding plans for the coming quarter on Wednesday, on expectations of a shrinking deficit.

It may also offer hope that Treasury bill issuance will increase as the Federal Reserve pares back its balance sheet, as short-term investors struggle with a dearth of short-term debt supply.

The Treasury has been cutting the size of its Treasury debt auctions since late last year, after ramping them up to unprecedented sizes in 2020 to pay for COVID-19 related spending.

Analysts are divided on how many maturities are likely to be cut for the third quarter, with some seeing cuts across the Treasury curve, while others expect reductions only in longer-dated and/or the seven-year and 20-year maturities.

The seven-year and 20-year Treasuries trade with relatively higher yields, which has caused some dislocations in the Treasury yield curve. Twenty-year bond yields, for example, are higher than those on 30-year bonds, while seven-year yields trade above those on 10-year debt.

Ian Lyngen, head of U.S. rates strategy at BMO Capital Markets in New York, said that the Treasury Borrowing Advisory Committee (TBAC), which releases a presentation along with the refunding announcement on Wednesday, is likely to focus on demand for the 20-year bonds.

He noted, however, that issues around the maturity relate to trading in the secondary market, with demand for the bonds solid at auctions. Lyngen expects 20-year yields to remain higher than 30-year bonds until the Fed begins cutting rates, which would resteepen the yield curve, but he added that this is unlikely in the near-term.

Meanwhile, the Treasury is likely to indicate that it will ramp up Treasury bill issuance in the coming months as it makes up for declining purchases by the Fed, which is letting more bonds roll off its balance sheet as part of its efforts to normalize monetary policy.

After beginning quantitative tightening in June and slowly ramping up in size, the Fed will let $95 billion in bonds mature in September, which will include $60 billion in Treasuries and $35 billion in mortgage-backed debt.

More Treasury bill supply should help ease an imbalance that has left money markets investors struggling with a lack of safe, short-term assets to buy.

“Bill supply should start to pick up in the next few months,” said Gennadiy Goldberg, an interest rate strategist at TD Securities in New York, noting that this should also reduce demand for the Fed’s reverse repurchase agreement facility, which is seeing daily demand of more than $2 trillion.

Credit Suisse’s Cohn noted that an increase in bill issuance, and cuts to coupon-bearing debt, should also help to rebalance the Treasury’s debt mix to be more in line with recommendations by the TBAC, which advises the government on its borrowing strategy.

Treasury bills outstanding have fallen to the low end of the TBAC’s recommended 15-20% of total debt, he said. “In increasing bill supply Treasury would be more thoughtfully distributing the supply burden as QT unfolds across investor bases with appropriate liquidity,” Cohn said.