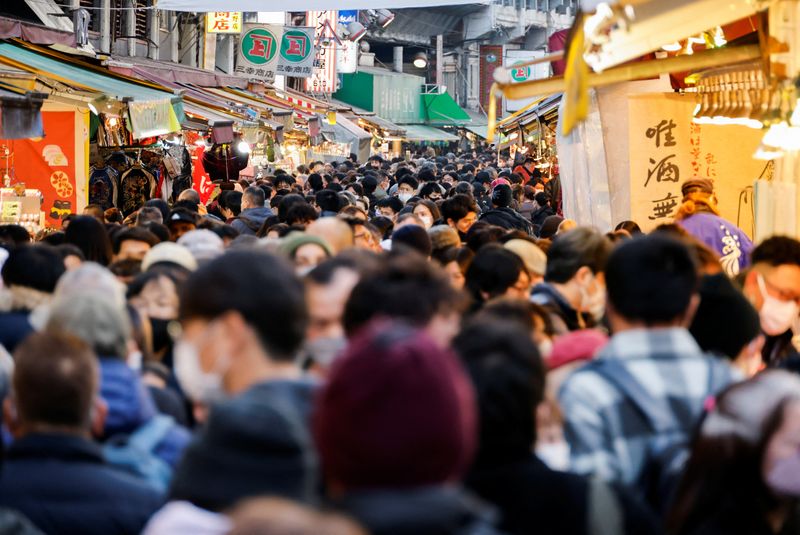 TOKYO (Reuters) - Japan's economic output recovered to near its full capacity for the first time in nearly three years, data showed on Friday, a sign the world's third-largest economy could be finally pulling out of a prolonged, coronavirus pandemic-induced slump.

The data adds to recent signs that Japan's economic recovery will help inflation stay around the central bank's 2% target, and could underpin market expectations of a further tweak to its ultra-loose policy, analysts say.

Japan's output gap, which measures the difference between an economy's actual and potential output, stood at -0.06% in the third quarter of last year, narrowing its decline for the fourth straight quarter, an estimate by the Bank of Japan (BOJ) showed.

It was the smallest drop since Japan's output gap turned negative in April-June 2020, when the outbreak of the pandemic began jolting the global economy, the estimate showed.

A negative output gap occurs when actual output is less than the economy's full capacity, and is considered a sign of weakening demand.

The output gap is among data the BOJ watches closely in determining whether the economy is expanding strongly enough to cause a demand-driven rise in inflation.

Under current projections, the BOJ expects the output gap to have turned positive around October last year and to continue to expand moderately.

A positive output gap is seen by analysts as among prerequisites for wages to rise more, and push inflation sustainably above the BOJ's 2% target.

Core consumer prices in November rose 3.7% from a year earlier and analysts expect inflation to remain above the BOJ's 2% in coming months, as companies continue to pass on higher costs to households.

Prospects of rising inflation have fuelled market speculation the BOJ could phase out stimulus by tweaking its yield control policy when Haruhiko Kuroda ends his term as governor in April.

Sources have told Reuters the BOJ will likely raise its inflation forecasts in fresh quarterly projections due this month, though the upgrade alone won't lead to an immediate interest rate hike.