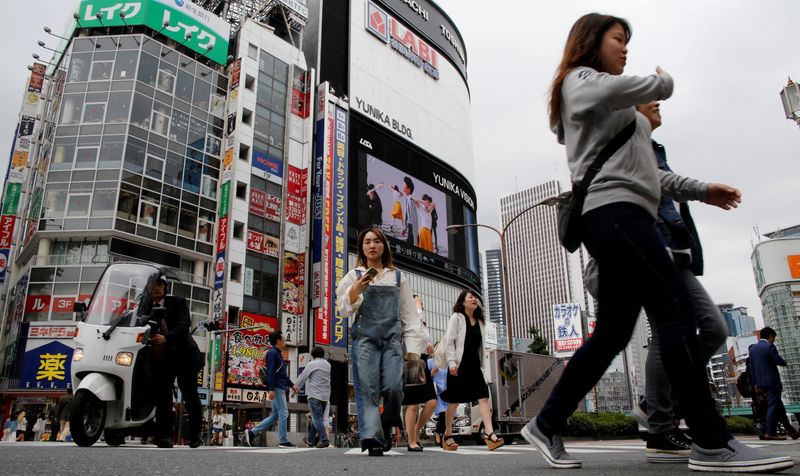 © Reuters. FILE PHOTO: People cross a street in the Shinjuku shopping and business district in Tokyo, Japan May 17, 2017. REUTERS/Toru Hanai

TOKYO (Reuters) - Japan kept the overall assessment of its economy unchanged for a second straight month in July, retaining the view that conditions remain severe due to the impact of the coronavirus pandemic.

In a monthly report approved by Prime Minister Yoshihide Suga's cabinet on Monday, the government said full attention should be given to the way infection trends are affecting the domestic economy as well as those abroad.

"The economy shows increased weakness in some parts, though it continued picking up amid severe conditions due to the coronavirus," the government said in its July assessment of economic conditions.

Authorities kept their view of key economic components such as private consumption - which accounts for more than half of gross domestic product (GDP) - as well as exports and output unchanged.

They said Japan's exports were gradually increasing due to a recovery of overseas economies.

Japan's economy likely barely grew in the second quarter, a Reuters poll showed last week, as it struggled with the fallout from coronavirus curbs in Tokyo and other major areas of economic activity, especially private spending.

The government will release a preliminary estimate for second-quarter GDP on Aug. 16.

A fresh state of emergency in Tokyo that will run through the Olympic Games until Aug. 22 is expected to hurt economic growth this quarter.

Analysts expected Japan's economy to grow an annualised 4.2%, down from a 4.6% expansion projected last month.