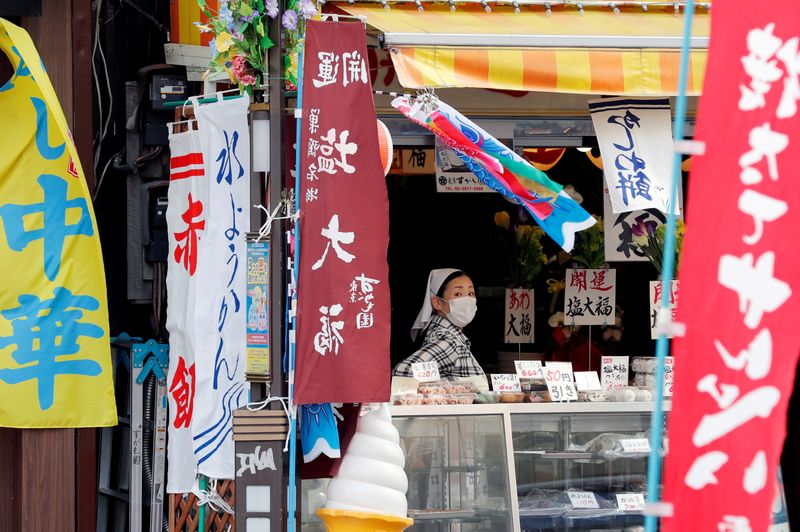 TOKYO (Reuters) - Japan's core consumer inflation in April is expected be slightly higher than the central bank's 2% target, hitting a seven-year peak as sharp climbs in fuel and global commodity costs push up the cost of living.

The nationwide core consumer price index (CPI), which excludes volatile fresh food costs but includes energy costs, is projected to have risen 2.1% in April from a year earlier, a Reuters poll showed.

Also driven by the dissipating effect of past cellphone fee cuts, the figure marks fastest pace of increase since March 2015, when the index jumped 2.2%. It follows a 0.8% rise in the previous month.

BOJ Governor Haruhiko Kuroda has repeatedly said the central bank will be in no rush to withdraw its massive stimulus on the view that the expected cost-push rise in inflation will be temporary.

Some analysts disagree, arguing that public perceptions of future price moves could change sharply if the cost-driven increase in inflation persists.

"Even if the BOJ keeps saying it will keep monetary policy ultra-loose, markets will read ahead and may start pricing in the chance of a future policy tweak," said Naomi Muguruma, senior market economist at Mitsubishi UFJ (NYSE:MUFG) Morgan Stanley (NYSE:MS) Securities.

Separate data is likely to show Japan suffered a trade deficit of 1.15 trillion yen ($8.9 billion) in April due to the surging cost of raw material imports, the poll showed.

It would be the ninth straight month of deficits, highlighting worsening terms of trade for a country heavily reliant on fuel and food imports.

Imports likely surged 35.0% in April from a year earlier, outpacing a 13.8% increase in exports, according to the poll.